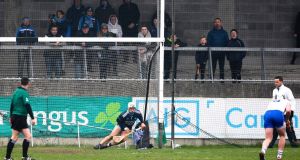 Dublin, and Alan Nolan in particular, would have kicked themselves if they’d lost this Allianz Hurling League Division 1B encounter at Parnell Park.

Leading by five points with 25 minutes to go, it looked as if goalkeeper Nolan’s early blunder, which gifted Waterford a goal, mightn’t matter all that much.

Yet when Dublin found themselves a point behind with 70 minutes on the clock after a strong Waterford revival, the early error suddenly threatened to separate the teams.

Perhaps that’s why Nolan was so determined to make amends deep into injury-time when Waterford, now trailing by two points, won a penalty and the opportunity to snatch victory.

Stephen Bennett, who was credited with the early Waterford goal after his miscued free somehow made it past Nolan, presided over the penalty in the eighth minute of stoppage time.

He struck low to the right but Nolan got down expertly to smother the ball and referee Fergal Horgan blew on his whistle to signal full-time. Immediate redemption for Nolan.

“He was unlucky with the first goal,” said Dublin manager Mattie Kenny. “He (Bennett) was going for a point, it was a miscued free that came in over the shoulder of the goalie, he saw it late and it just came off his fingers. Alan is a top, top ‘keeper and he dusted himself off after that, played a fine game and made a really good save at the finish from that penalty.”

Nolan was among a list of Dublin players who raised their games and helped secure the most significant win of the Kenny era so far.

Former All-Star Danny Sutcliffe was terrific, scoring four points and popping up all around the field with various important interventions, from hooks and blocks to clever passes for scores.

Kenny name-checked Caolan Conway in attack while John Hetherton and Oisin O’Rorke also had strong games up front. It was O’Rorke who scored Dublin’s last four points of the game, helping to turn that one-point deficit into a two-point win.

Dublin would have cursed themselves if they hadn’t held on because they played so well. They led 0-14 to 3-3 at half-time and outplayed a previously unbeaten Waterford side that clung on to goals from Stephen and Shane Bennett and Thomas Ryan.

The second-half was thrill-a-minute stuff, Dublin forging five points clear and adding a goal through Liam Rushe yet unable to prevent Waterford rallying.

It set up a terrific finale and the only downside for Dublin was Darragh O’Connell’s red card for an incident after the penalty award for his foul on Ryan.