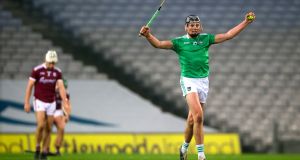 After the champagne on Saturday night, the second All-Ireland hurling semi-final served up some flattish ale, as favourites Limerick made hard work of a persistent challenge from Galway, who were level as late as five minutes into injury-time.

For the winners it was a nervy encounter against the one team originally deemed likely to cause them trouble because of their ability to compete physically as well as their attacking capacity.

The contest followed an expected pattern but in this Valley of the Giants narrative, it was Limerick who came out on top, as their half forwards dismantled the opposition and they won a third of the opposition puck-outs.

That’s not how it opened. Galway won the first and last quarters of the match but were too well beaten in between the water breaks to hang on. Joe Canning converted early frees and a lineball - one of four he floated over during the match - and Cathal Mannion, Brian Concannon and Conor Whelan added their own flourishes, triggering alarm bells for the Munster champions.

Mannion and Canning had to leave injured - the former as early as the 24th minute and the latter after a nasty but accidental blow to the head after a collision with teammate Joseph Cooney before the hour was up.

Canning hadn’t scored from play but he nailed a dozen deadball opportunities including four of what Limerick manager John Kiely reckoned must have been an unprecedented five line balls - replacement Fintan Burke added the other.

He had been replaced before throw-in by manager Shane O’Neill’s tactical switch with Seán Loftus, who was detailed to mark Graeme Mulcahy - a task that went well as the Kilmallock corner forward was unusually quiet - failing to capitalise on his interception of a Murphy puck-out in the 15th minute - and replaced by the 40th minute.

In fact the whole Limerick full-forward line was quiet and only Séamus Flanagan raised flags from play and he too had goal chances thwarted by the Galway ‘keeper in the first and second halves, the latter nearly follow up into the net by Kyle Hayes. Murphy also kept out a close-in shot from replacement David Reidy at the negligible cost of a 65.

It must be factored in that Daithí Burke was again supreme at full back, in the 44th minute rising with the taller Flanagan to pluck down a dropping ball from Peter Casey.

Limerick will have been relieved to emerge from a second successive searching examination after the edgy provincial final victory, albeit a win that has aged well since given Waterford’s form since.

They became only the second Munster champions in nine years to qualify for the final, which after their fate in 2019 they will value.

The win was also attended by some good fortune. Galway goalkeeper Éanna Murphy may have defied them on three or four occasions when goals beckoned but his restarts were turned over for so many points that Limerick were almost compensated.

Gearóid Hegarty was again excellent for the winners but just before half-time he drew a wallop on Canning that could easily have resulted in a red card but it went unseen by the match officials.

Galway had done enough to lead 0-7 to 0-4 by the first water break but thereafter entered the mysterious zone where they start to make mistakes and turn over ball. In the space of five minutes from the 19th, they rattled off four points to level the match at 0-8 each.

Limerick’s renowned middle third had its impact, mostly through the dominance of wing forwards Hegarty and Tom Morrissey, who ruled the air and converted that into nine points from play between them. At centre forward between them, Cian Lynch was quiet in the first-half but came into view afterwards, scoring twice from play in the second.

Their defence also held up well. Dan Morrissey had a decent evening at full back, having to mark Joe Canning for a lot of time - yet not conceded from play - and beside him Seán Finn was again excellent.

In the second-half, O’Neill switched Joseph Cooney to wing forward to try to pose a few more problems for Hayes and he obliged within seconds with the first point of the resumption but the match didn’t catch fire even as Galway fought to keep it within their sights and actually drew level in the 70th and 75th minutes - Canning’s lengthy treatment meant nine minutes of injury-time.

The second of those scores showed the leadership Conor Whelan displayed in getting his team back into contention. Daithi Burke again snuffed out danger and got the ball to Pádraic Mannion, again playing sweeper, and Whelan travelled nearly to his own 45 to take the outlet pass and set up impressive replacement Evan Niland for 0-23 each.

By the end Limerick had been guilty of squandermania with scoring chances, notching 15 - a total that kept Galway in business a lot longer than the general run of play had suggested.

But they got there and now have the opportunity to add a second All-Ireland in three years.