Once in a blue moon: Cavan’s overnight success 15 years in the making

For proud Cavan supporters of a certain vintage, it was much, much longer than that 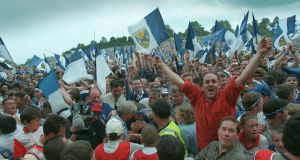 Last Sunday night and Monday morning saw Cavan supporters across the land in a most curious position – replying to text messages congratulating them on a long-awaited day.

If you know a Cavan person – and you must because first and second generation Breffnians are everywhere – then chances are you will associate them with a couple of tribal characteristics: a love of football matched only by a deep longing for times past, a desire to Make Cavan Great Again.

There exists within the Cavan supporter a couple of contradictory yet equally unshakeable beliefs. One is that Cavan should, as a sort of birthright, be winning most Ulster titles and at least a couple of All-Irelands every decade.

The other – and here’s where the almost comedic delusion comes in which has too often turned us into walking punchlines – is that the current Cavan team wouldn’t, in the local parlance, “kick snow off a rope”!

It must be unique, that combination of fatalism and hope and it generally begets the same question, with apologies to George Best. Where did it all go wrong?

The backstory provides the context. By 1952, Cavan were near the top of the roll of honour with five All-Irelands and 40-odd Ulster titles. Or so we claimed.

It wasn’t strictly true. Between 1892 and 1900, there was no Ulster Championship played. And because Cavan had won the last one that was, they counted the following nine years as theirs as well. And who was going to dare argue with the biggest boy in the schoolyard?

Cavan football was at its zenith in those heady mid-century days, when reaching the All-Ireland final was a good year, winning it a great one and Ulster was taken as a formality. So much so that 1947, the year of the Polo Grounds, was the first time the county team ever actually trained before an Ulster final.

Maurice Hayes, the Down official who was the pioneer of their 1960s breakthrough, once summed up the attitude of other teams in the province.

“Then there was Cavan, lying like a dragon in the path of any other Ulster county . . . The highest ambition any Ulster county could have was to beat Cavan once in a blue moon. That was their All-Ireland final. After that they had nothing left to achieve.”

There are many theories as to why the success dried up. Some say it was depopulation – and that was certainly a factor – while others, and we’re not joking here, blame the opening of the county’s first disco.

One thing is certain: all changed suddenly in the mid-1950s. In November of 1952, six weeks after Sam Maguire came back to Breffni for a fifth time, John Joe O’Reilly died. The county had lost its leader.

Armagh broke through in ‘53 but it was seen as a blip. In ‘54 and ‘55, The Anglo-Celt Cup was reclaimed. And then came an unprecedented seven-year famine during which Tyrone, Derry and Down claimed their maiden titles.

Each of them beat Cavan along the way. Down supporters scaled the goalposts in Clones after the 1959 final in sheer jubilation after an unthinkable 2-16 to 0-7 win which the local Anglo-Celt summed up in a pithy five-word headline: “Too bad to be true.”

Cavan, then and now a very rural county, was one of the hardest-hit centres of emigration. As the county haemorrhaged young men, mainly to England, the focus on the footballers increased and it had reached near-desperation by ‘62 after Down won two successive All-Irelands.

Cavan stopped the bleeding when beating them in the Ulster final that year and they would win three more before the decade was out, culminating in a brilliant victory in 1969, but they couldn’t mine another All-Ireland out of it.

And then, nothing. The 1970s were the first decade in which no Ulster title was claimed. The 1980s were worse, with only one final appearance. There was a brief revival in the mid-1990s, highlighted by a glorious Ulster success under Martin McHugh in 1997.

By then, the wheel had come full circle; where once, Cavan sent emissaries like John Joe and Mick Higgins to coach weaker counties like Donegal, now they were coming south. Ailing, Cavan continued to look to outsiders to save them but none could administer a cure.

When the ‘97 team broke up, with little coming off the underage production line, the stock of the famous blue jersey plummeted. In 2012, they bottomed out, barely surviving in Division Three and picking up a couple of routine hidings in the championship.

Something, though, was stirring. The under-21s, under Terry Hyland, enjoyed a breakthrough success and strung together three more. The minors won and St Patrick’s College, the traditional academy where youngsters were honed in the house style, landed a first MacRory Cup in four decades.

Hyland took over the seniors and came close; while there were no trophies, the culture had changed and Cavan were competitive again. Mickey Graham arrived at the tail end of 2018 and a first Ulster final was reached the following summer.

And then came last Sunday. Seventeen of the 26 togged out were graduates of those successful underage teams. The other nine were aged 22 or under. Donegal were done and suddenly, Cavan are looking up, not down.

Inspirational captain Ray Galligan made his debut in the 2006 Tommy Murphy Cup and spent time on the county junior side before landing on the inter-county scrapheap and then reinventing himself as a goalkeeper.

Martin Reilly came on board the following year, having had a shot at making it across the water with Burnley. In 2008, Niall Murray and Gearóid McKiernan were part of a good minor side, under Graham, who, in typical fashion in those times, had their hearts broken by Tyrone. All, though, stayed the course and at long-suffering last, got their reward.

For them, this was an overnight success 15 years in the making. For supporters of a certain vintage, it was much, much longer than that.

Paul Fitzpatrick is Sports Editor of the Anglo-Celt newspaper