‘It wasn’t down to anything dramatic I said . . . It was down to the players’ 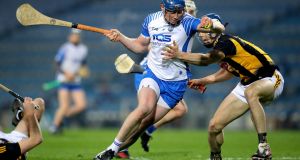 When the lonesome final whistle blew, some of the Waterford players fell to the ground to stop it from spinning, the sound of their own breathlessness still ringing around Croke Park, and only then realising exactly where they had landed.

In Zen experience there are two barriers to mastery: not setting out, and not going all the way. From the throw-in on Saturday evening, Waterford looked in danger of hitting that first barrier; once they got going there was no fear of hitting the second.

No disputing it either. In the final act of this latest thriller from the hurling semi-final series, Austin Gleeson signed off over his left shoulder with the proverbial security point to seal their passage into a December final that already seems to have 2020 written all over it: who on earth saw Waterford coming?

Because in going all the way to the final, Waterford not only overcame a worrying half-time deficit, having gone two years without winning any championship match, they also denied a Kilkenny team that, under Brian Cody, had owned this territory for the last 15 years. Now the talk is not of his extended winning streak at the semi-final stage, but a first semi-final win for Waterford manager Liam Cahill, a Tipperary native, in his first season in charge.

Waterford had come armed to the teeth with scoring ambition and potential, second only to Limerick’s faultless artillery – averaging 29 points per game from three games – yet found themselves playing periods in the first half when, even close to goal, they couldn’t find a score.

Then, from nine points down shortly before half-time, seven points down at the break, they outscored Kilkenny 1-11 to 0-4 in the time up the second water break. Still, there was no let-up from there, as they slowly turned the game upside down and inside out, despite Kilkenny’s constant raging against the dying of the light, Gleeson (0-4) and Stephen Bennett (1-10) showing them the way.

“Thrilled and delighted,” said Cahill, unshaken and only mildly stirred, it seemed, before he walked the steps back down the Waterford dressing room. “It wasn’t down to anything dramatic I said, I can assure you of that. It was down to the players. Just their decision-making was costing us big-time – in the first half we left quite a number of easy plays and chances behind us. We just seemed to be off it, but our mindset more than our legs, and we just tried to address that.

“We needed the green flag or two, to give us that chance of getting back in the game, and thankfully we got that. And the real good sign for me was that fellas didn’t give up on it, they kept backing themselves, willing and wanted to turn it around. That’s what decent teams are made of – so very proud of the players.

“Every day you play a team like Kilkenny, you need that ruthlessness to see out matches as well,” added Cahill. “And credit to the likes of Austin Gleeson there, he gave it everything he had. If ever a performance epitomised Austin Gleeson, that was it out there tonight. In fairness to the man, over my reign anyway, he’s brought a whole new aspect to the game, and I’m delighted for him in particular. And Stephen Bennett is having a marvellous year, isn’t he? He’s always been a good forward, the difference is now he’s delivering consistently, and thrilled for him too.

“But I think it was a realistic goal to make the final, without sounding confident or arrogant, but we did feel if we got the balance of the team right we’d have a good chance, and we’re looking forward to it now.”

Often in semi-finals, the performance takes a backseat to the winning, Waterford driving shotgun in both once the second half got going. Any fear of a third championship game in 13 days, a fourth in five weeks, proving tiresome beyond normal means also went with the end result.

Cody had written chapter and verse on the winning semi-finals. In this his 22nd season as Kilkenny manager, this was his 20th semi-final, having won 16, he now loses the first in 15 years, without any excuses whatsoever.

“We’d a seven-point lead at half-time, that was never unassailable,” said Cody, after what was also Kilkenny’s first-ever semi-final loss to Waterford. “I can say absolutely the game lasts 70, 74 minutes. They were very, very strong in the second half, won an awful lot of ball, were very athletic, got great scores. And that’s it, we were beaten fair and square.

“They were strong in the sky, but that’s hurling, they haven’t done anything thing any team hasn’t done before, they deservedly won the game.

“We had opportunities too, and didn’t take them on, but we were still fighting at the end, got it back to two points near the end. They tried to keep going, and great credit the players, they gave it all they had, and came up short. If you lose the game, you can’t be making excuses. And certainly Liam Cahill is a very happy man going home this evening, the quality of Waterford was serious, and they fully deserved to win it.”

The final in two weeks will be played behind closed doors too, Cahill imploring the GAA to allow the full panel attend. “The only thing I would demand is that the extended panel and the rest of the backroom team are allowed in, which is another 10, 15 max. That’s another massive plus.”