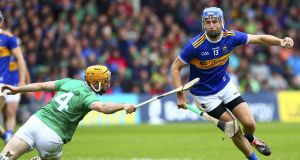 Borrowing a metaphor from another sport, there was an element of shadow boxing to events in Thurles, a phony war where neither eventual winners Tipperary nor reigning All Ireland champions Limerick reached the standards of their previous games.

There was nothing tangible at stake and, with that as a backdrop, it wasn’t surprising the way the game unravelled. The contest lacked intensity for the most part and because of that, carelessness and sloppiness, crept into the proceedings and once admitted, refused to leave.

Psychologically it was important for Tipperary to win this game because their opponents chose not to travel to Thurles fully-loaded personnel-wise from the start.

It was hard to get a level on the game in Thurles. We have been used to both teams in their previous games really flowing whereas there was little or no flow to this contest.

Conditions didn’t help but that doesn’t fully exonerate both teams in terms of the nature of the match; a stop-start affair for the most part, punctuated by frees and yellow cards.

There was a huge crowd in Thurles but neither set of supporters got too excited over what they witnessed. There was a period just after half-time when intensity level were ratcheted up but it was a brief burst that quickly dissipated again as the teams succumbed to poor touches, lacklustre finishing and missed opportunities punctuated by plenty of substitutions.

It ended as it started with most people none the wiser as to what might potentially happen in a Munster final where the dial would be turned up several notches. Limerick had a read-made excuse from the off by omitting players like Gearóid Hegarty, Cian Lynch and Declan Hannon. Hegarty didn’t even come on and he has been as important a player for Limerick as anyone in the previous last two weeks.

What was significant about the game was the injuries to Tipperary pair, Cathal Barrett and Patrick ‘Bonner’ Maher. Barrett’s hamstring issue suggests that he is unlikely to feature in a Munster final but could get back at some point after that but Maher’s knee injury looks season-ending and that is a massive blow to Tipperary as he has been one of the outstanding players in the 2019 championship.

Limerick looked a little fatigued mentally as much as physically, playing their third match in two weeks. Collectively they lacked sharpness, one example in the dying moments of the game a ball from Paddy O’Loughlin to Tom Morrissey is allowed to wander over the sideline.

That precision and energy was missing and while there’s no doubting that the Limerick players applied themselves to winning the match, they didn’t have that focus and fire that would be present if there was something tangible at stake and maybe were more indisciplined than when at their best.

The big question is can they flick the switch next time out when it’s a Munster final. It’s unlikely that Hannon and Hegarty will be absentees the next day, removing any possible excuses.

The events in Ennis confirmed the doubts I have about Cork; they’re far from bulletproof. They’ve had two poor defeats in Munster and haven’t broached the form of 2018.

The real drama was in Leinster where Dublin toppled Galway and we were treated to a brilliant game between Wexford and Kilkenny that ended with honours even. There was a tremendous atmosphere in Wexford Park and Parnell Park as both matches went down to the wire.

I didn’t expect Dublin to win because I thought Galway had more scoring power but that wasn’t the case on the night. It is a significant scalp for Dublin and to emerge from Leinster illustrates the progress made.

The Wexford-Kilkenny match was brilliantly fought, flaws and all, in difficult conditions, and was never less than compelling with a nail-biting finish thrown in. It was appreciably more free-flowing than the game in Thurles, benefiting from a different refereeing style, but there was sufficient thunder in the collisions to underline the intensity of the exchanges. Both teams went at it wholeheartedly.

Jack O’Connor made a big impact and Diarmuid O’Keeffe was outstanding for a lot of the game while Matt O’Hanlon did a great job in negating the influence of TJ Reid. That deserves special mention given Reid’s influence on previous matches. Walter Walsh and Cillian Buckley returned to the Kilkenny team. Both teams will be happy enough to have a crack off each other again in a Leinster final.

People have suggested that the Munster championship is superior to its Leinster sibling but there have been many one-sided matches in Munster, while the competition and standard in Leinster has been more even. That could give them an edge when it comes to being battle-hardened for the remainder of the championship.

After watching the game in Thurles that superiority is not quite as clear-cut as some assert, albeit it is possible the Munster teams will raise the quality when there is something tangible at stake.