GAA Statistics: Noel McGrath is the man to stop and the man to give the ball to 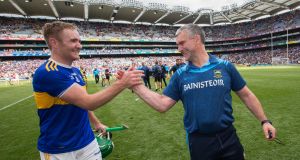 Noel McGrath’s switch to midfield this summer has been a resounding success – he’s recorded Tipperary’s highest number of assists and is still their fourth top scorer this championship.

In all he has scored 1-18, and assisted 2-19 in seven championship matches. So as well as averaging just under four assists and converting 0-3 per match from the middle of the park, he has scored or assisted 22 per cent of Tipperary’s total en route to Sunday’s All-Ireland final.

Rather than being a primary score-getter in the inside line, or a marked man elsewhere in the forwards, this year he’s been able to show off the full range of his talents and the remaining attackers are reaping the benefits.

The Young Hurler of the Year a decade ago, he is capable of finding a moving target inside with remarkable accuracy and spotting a free man out wide with razor like instincts. But equally impressive is his peripheral vision to feed off the shoulder runners and put them into scoring positions: three of his assists have been handpasses, three were short passes, he improvised for one with a kickpass and another was a deft flick.

McGrath’s move out to the Tipperary midfield this year initially came as a surprise, but this is a position he thrived in as an underage hurler. And despite a minor blip in the Munster final defeat to Limerick, he has consistently been one of Tipperary’s standout performers since returning to the role.

Albeit outworked and overran in that defeat to Limerick, like the majority of his team mates, a subdued McGrath still did assist 1-2 and he scored a free before he was replaced in the second half. Neither he nor Tipp can afford a repeat performance but, nevertheless, his quality is worth persisting with even on the quieter days.

The goal he created with a quickly taken free to Séamus Callanan - it was one of four times this summer that a quick free from the eagle-eyed McGrath created a score for Tipperary. A situation where most teams will wait for their free-taker to come back and ready himself for a pop at the posts, McGrath will always be at hand to weigh up the quick option first – something Brian Cody’s Kilkenny team will need to be switched on for.

The goal was part of a tally of 2-2 that the 28-year-old has assisted for Callanan – more than double what he has created for any other player to score from play. The Loughmore-Castleiney club man has assisted scores for eight Tipperary players so far this summer: Jason Forde has been assisted for four points (two frees), his brother John has scored 0-3, likewise John ‘Bubbles’ O’Dwyer, while Ronan, Pádraic and Brendan Maher all have scored two points apiece and Ger Browne also has his midfielder to thank for a score.

Against Wexford, McGrath began the game at centre forward but switched back out to the engine room before half time, an important move in swinging the momentum in his team’s favour after a strong start by the Leinster champions. He’d only touched the ball three times at 11, but by the end of the match he’d had 15 possessions, scored 0-4 and directly assisted 0-2.

One of those assists was for Bubbles, as the sharpshooter from Killenaule scored 0-3 and himself assisted a further three points on the day. That brought his assists to 3-12 for the summer, the team’s highest number after McGrath. He’s also scored the fifth most of any Tipperary player, with 0-16. All from play.

Crucially, in Tipp’s one defeat this summer against Limerick, O’Dwyer was also replaced in the second half and this was his only match not to register an assist in during Tipperary’s seven game run to the final.

Dan McCormack is next on the assists leaderboard, Tipp’s Mr Versatility has provided the final pass or been fouled for 1-13. Noel’s brother John has scored 2-16 and assisted 2-8. Making up the top five is Niall O’Meara (who like McCormack has only scored a point himself this summer) and Jason Forde who have both assisted 2-5. Forde was also fouled for a further 1-4 that he converted himself from the resultant dead balls.

Séamus Callanan, Ronan Maher and Paudric Maher are next having assisted nine points each. In total 24 Tipperary players have assisted scores. All but eight have assisted three or more times, including goalkeeper Brian Hogan.

His long deliveries have assisted four scores – three from long puckouts and one from a long free. Callanan, Bubbles on two occasions and Jake Morris were the men at the end of the delivery while Hogan also set up Noel McGrath for a point with a short puckout.

In his first year back at the helm Liam Sheedy has built a team full of excellent individuals who will give the ball to the right man in the best position to score. Tipperary’s interplay has been a joy to watch, with so many threats and so many capable and willing to assist.

Central to knitting everything together though, in the middle of it all, is Noel McGrath. Kilkenny know who to target and Tipperary know who to give the ball to.