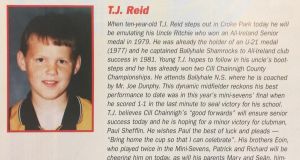 This weekend marks 21 years since TJ Reid’s first appearance in an All-Ireland programme.

On Sunday, TJ Reid captains Kilkenny into the All-Ireland final. It’s a fitting finale to his year. He has been outstanding on the unlikely journey that has taken the county, widely assessed to be in transition when the year began, to the brink of what would be manager Brian Cody’s 12th All-Ireland title.

In scoring terms alone, he has contributed nearly 50 per cent of the team’s scores in the seven matches to date: 5-72 from 11-156, 3-11 of it from play, an average of nearly three points from play out of an overall match average of more than 0-12.

That doesn’t take into account his ball-winning capacity and general leadership. When Limerick kept him scoreless from play in the All-Ireland semi-final, he was still chosen as RTÉ’s Man of the Match for his peerless contribution, floating around the field and orchestrating attacks.

On these pages hurling analyst Nicky English summarised the performance.

“He is an amazing player and Limerick suffered by not deploying an out-and-out man-marker to try to mitigate his influence. He mightn’t have scored from play but was involved in everything, and his free-taking cranked up the pressure on Limerick throughout the first half.

“Even when he missed his only placed ball, he promptly won the resulting puck-out.”

Already Hurler of the Year for 2015, he is short odds to be inscribed on the roll of honour for a second time at the end of this season should Kilkenny beat Tipperary.

It’s probably not widely known that this weekend marks 21 years since Reid’s first appearance in an All-Ireland programme. Back in 1998, when Kilkenny met Offaly in the senior final and Cork in the minor (losing both), a 10-year-old TJ was a featured player in the mini-sevens.

Introduced as the nephew of Richie, who had won an All-Ireland in 1979, and detailed as attending Ballyhale NS, he is said to hope “to follow in his uncle’s bootsteps”.

He wishes club-mate Paul Shefflin the best of luck in the minor final.

He was skilful for his age, a good chap at under-age. He always had a hurley and was always at matches

Earlier that year he had been part of the Ballyhale Shamrocks under-14s, who won Féile.

In Ballyhale, John Drennan coached the young TJ and was also part of the management when the club won the All-Ireland title in 2015 under the captaincy of Reid. He remembers well the emergence of the young player.

“He was skilful for his age, a good chap at under-age. He always had a hurley and was always at matches. His Dad Seán trained us and TJ and the brothers were often there with him. You’d see them around and he would be holding it in the left hand but it was natural and if you see that sort of ability, you go with it.

“If I’m down there tonight and I see a young lad of six catching it in his left hand, you’re only interested in developing him as a player. I don’t know why in the past you’d try to change a left-handed player but I suppose even in schools it was happening.”

Drennan makes the point that in those years a decade ago, there wasn’t the same emphasis on keeping age cohorts together.

“In those days there weren’t as many age groups compared to now. He would have played in the schools’ league and at under-10, I remember, in the Clover Meats tournament in Waterford. I think it’s better now that they’re in their own age groups.

“A rural club like Shamrocks will always struggle a bit at under-age because of the numbers. You’ve a few the right age and a few just under it but also a few who are very young, but when they all grow up, it’s a level playing field. When Shamrocks won Féile, TJ was the sub goalkeeper and he was only 10.

“That Féile group was the backbone of four All-Ireland winning [club] teams.”

He put on a show that day. People were looking at him and thinking, ‘here we go!’

The names of that team are familiar not just from the club championships, won in 2007, 2010, 2015 and this year, but amongst the group of youngsters are two future Hurlers of the Year, Reid and Michael Fennelly, as well as 2006 Young Hurler of the Year, James “Cha” Fitzpatrick.

The young Reid wasn’t very big and took time to mature physically into the powerful presence familiar to the hurling public.

Asked if the prodigy’s ascent was seamless and incremental or heralded by some epiphany, John Drennan recalls a county championship match in 2005 when Reid was just starting at senior.

“It was his first full year, I think, playing senior with us – he would have been 17 – and we had a county semi-final against O’Loughlin Gaels. He put on a show that day. People were looking at him and thinking, ‘here we go!’”

That same year he had lost a colleges’ All-Ireland final with St Kieran’s against St Flannan’s.

By now he was well on the way to an inter-county career and if his time as a minor was unusually brief, Dublin beating Kilkenny, he was involved in three All-Ireland under-21 finals, losing one to Galway when an unused sub, but winning the 2006 and 2008 titles, both at the expense of Tipperary – in the latter year against a number of the players he faces on Sunday.

In what has been a Hall of Fame career, repeating that victory this weekend would surely count as the greatest achievement in what even by Kilkenny standards has been a monumental contribution to hurling.

Former Barcelona president Bartomeu arrested after club offices raided 13:01
Echoes of Berlin 1936 . . . Should Beijing Winter Olympics be boycotted? 10:01
The Offload: Ireland women must be allowed to move with the times 10:00
Tiger Woods touched by red and black tribute by fellow players 08:52
England prop receives death threats for not clapping Wales off the pitch 08:29
Crossword Get access to over 6,000 interactive crosswords