Cathal Mannion and the loneliness of the long-distance hurler 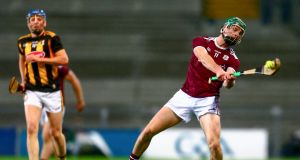 Cathal Mannion can’t recall exactly what time he got home to Galway last Saturday night, only that it felt like a long and lonesome journey. Especially with the sound of the Croke Park silence ringing in his ears.

Losing to Kilkenny in a Leinster hurling final hurts at the best of times; at the worst of times, driving home alone for 200km through the rainy and dark pandemic winter night, it probably hurts that bit more, although in some ways Mannion was glad of the time.

Given the 6.15pm throw-in, it was after 9pm by the time the Galway players dispersed for the solo drive back west, all part of the return to play protocols, and any recurring thought about what went wrong - how was Richie Hogan allowed 1-2? - was interrupted by a brighter one: at least Galway are still in it.

Ample time, too, to put a call into his brother Pádraic Mannion, who played at centre back, but most of the time Mannion was lost in his own thoughts.

“You would be thinking about your own game,” he says, “and after being in a winning position, it is very disappointing, but you can’t dwell on it either.

“We knew there’s such a quick turnaround. Then you look at the Galway footballers on Sunday, losing their first championship game, and they’re gone after that. Everyone knew the format, knew what’s at stake, and it just means Saturday is going to be a massive game for us. So disappointing, yeah, but we still did a lot of things well, to be in that position, and we just have to take that into the next game.”

Which by Monday morning was revealed to be against defending All-Ireland champions Tipperary, set for the LIT Gaelic Grounds on Saturday (1.15pm). It’s a shorter drive but ample time nonetheless to consider the challenge of arguably their closest rivals of recent years. Once drawn against each other, their 2015-2017 All-Ireland semi-final trilogy was instantly referenced, those three games alone seeing the teams level 28 times.

“Look, there is great tradition between Galway-Tipp, but being honest players won’t be thinking of what’s gone in the past. The majority of our players are still there from 2017, have the experience of winning that All-Ireland, but with Covid, this year is more different than any year.

“The build-up, running out, is so different. But once the ball is thrown in you’re just concentrating on what you do. Most players would prefer the crowds, the buzz of championship. But one big advantage is that you can communicate a lot better on the pitch. If you’re playing in a packed Croke Park, you can’t hear as well.”

During those reflections back on Croke Park last Saturday night, Mannion could also dwell temporarily at least to the second half water break, which Galway approached having hit four points in a row; when play resumed, Kilkenny hit back, Hogan’s and TJ Reid’s goals coming in quick succession, before Kilkenny won out 2-20 to 0-24.

“I think every team is at it now, every team is using it as much as they can,” says Mannion, not entirely sure whether to favour the water break or not.

“It’s a break in play. It’s almost like a half-time, where you might change one thing or another. Every team is at it. So obviously it helps teams but it doesn’t help a team that has momentum. You can use it as an advantage or it could be a disadvantage depending on the way the game is going.”