Tribesmen run out 10-point winners at the Gaelic Grounds 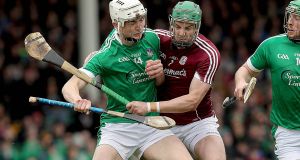 Limerick’s Kyle Hayes in action against Adrian Tuohy of Galway during the Allianz Hurling League Division 1A semi-final at the Gaelic Grounds. Photograph: Donall Farmer/Inpho

Their supporters packed out the stand and their enthusiasm filled the air but it wasn’t enough to sustain Limerick, this game ultimately delivering nothing more than Galway’s safe passage into next Sunday’s Allianz Hurling League final.

Strangely stop-start, never properly igniting or indeed even threatening to, Limerick were put to bed early on, and Galway made sure they stayed there.

Conor Cooney’s goal on 56 minutes put the game well out of their reach, and from there Limerick’s enthusiasm dropped slowly below zero. Many of those same supporters drifted out before the end. Galway effectively won pulling up and apparently with ample energy left in reserve.

It puts Galway back in the league final for the first time since 2010, and in rude health too. Eight different players scored, Joe Canning chief among them with his 0-7, but equalled scoring-wise by Cooney, who finished with 1-4

That bumper crowd of 9,523 probably deserved better, although meeting for the second time in three weeks – Galway winning by two points in the final round of 1B games – this was surprisingly one-sided.

Trailing by five points at half-time, despite scoring the first goal on 20 minutes, Limerick were thoroughly outclassed by the end, their final wide tally 17 wides, compared to eight for Galway.

Galway arrived in good spirits, having come from 10 points down in their quarter-final against Waterford, and duly picked up where they left off that day – scoring seven points in the opening 15 minutes, Cooney and Cathal Mannion hitting the best of them.

Limerick, already against it, hit back on 20 minutes: David Dempsey surrounded in possession close to the goalmouth, deftly flicked the short distance to William O’Donoghue, who although unable to hold on to the ball, managed to boot it past Colm Callanan and into the Galway net.

Even at that early stage, it felt Limerick needed that goal to keep in touch, bringing them back to within one, 0-7 to 1-3. It didn’t long, however, as Galway stepped it up again and closed out the half with six points to Limerick’s two, and with that up 0-13 to 1-5 at the break.

Even with the breeze in their backs for the second half, Limerick’s form was slow in turning, Shane Dowling sending wide his first free of the half: he hit the next score from play, briefly reducing the deficit to four, but Galway hit the three points, before Cooney’s goal, set up by Mannion, closed out the deal early.