Munster MFC: Cork too strong for Tipperary at Semple Stadium 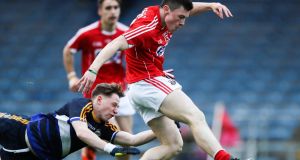 Cork hammered Tipperary by 19 points at Semple Stadium to progress to the semi-finals of the Electric Ireland Munster minor football championship.

The Rebels had five of their six starting forwards on target en route to a facile victory in front of 1,158 spectators in Thurles.

The inside trio of Mark Cronin, Cathal O’Mahony and Damien Gore accounted for 3-13 – Cronin bagging 2-4 and Gore 1-5.

Cork were 1-9 to 0-4 clear at half-time before opening up impressively after the break.

Tipp scored a late consolation goal from sub Adam McGrath but finished with 14 players when Shane Ryan was black-carded in stoppage time, with six subs used.

Despite matching their opponents for six points in the second period, Clare simply could not live with the scoring prowess of the reigning All-Ireland minor champions in the first period as the hosts had a comfortable 13-point victory at Austin Stack Park.

Donal O’Sullivan led the line for the victors with an impressive total of 1-6 as team captain David Clifford scored the first goal of the game after only five minutes. O’Sullivan followed up with their second two minutes later; Clare’s only first-half score was a goal by Gearóid Cahill in the 16th minute as the Kingdom led by 2-10 to 1-0 at half-time.

There was an air of inevitably about the second period but Gavin Cooney finally raised a white flag for the Banner County in the 44th minute as the hosts laboured to 10 poor second-half wides.

Chris O’Donoghue, Ryan O’Neill and Eddie Horan impressed in the second period for Kerry despite Horan receiving a second yellow card towards the end.

Kerry’s win now puts them on a collision course with Cork next month in the Munster semi-final at Páirc Uí Rinn .

A late goal by substitute Calvin Moran spared Limerick blushes at the Gaelic Grounds as they survived a brave bid by Waterford to win their first game in this championship since 2014.

Sean Whelan-Barrett opened the scoring with a pointed free but Limerick picked off four in a row.

By half-time Limerick led 0-7 to 0-2 and they had the opening point of the second half.

Waterford had been reduced to 14 after 25 minutes for a straight red card but they battled bravely in the second half and on three occasions only three points separated them. And it was down to a single point until super sub Moran’s late strike.