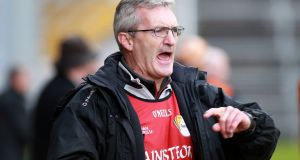 Colm Bonnar: “There’s a huge passion in Wexford hurling to get back to those years when they were competing so well.” Photograph: John McIlwaine/Inpho/Presseye

Colm Bonnar has good reason to remember the last time Tipperary played Wexford in the league.

The counties meet on Sunday in Nowlan Park in this year’s AFL semi-final for the first time since 2011. Bonnar, an All-Ireland winner with his native Tipperary and currently in charge of Carlow, was at that stage manager of Wexford and the match was the last of the divisional fixtures.

“We had lost to Offaly, which was a setback,” he said, “and in our last two matches we played Cork and Tipperary. We had a great win over Cork but because Offaly had beaten us in the head-to-head, we needed to finish above them in the table.”

The match against Tipp was in Thurles and Willie Doran’s 71st-minute goal secured a draw, which meant that Wexford had survived.

“It was a big achievement for us to have taken points off both Cork and Tipp,” said Bonnar.

“Our supporters were coming on to the pitch and celebrating that the draw had kept us up. It was that important and I remember Joe Dooley, who was Offaly manager at the time, saying that he was afraid relegation would kill off Offaly hurling.”

These may have been prophetic words, as the county has toyed more regularly with relegation to Division Two A than promotion back to the top flight.

There was however a sting in the tail for Wexford as well.

Roughly four months later the GAA’s Central Council voted to reduce the top two divisions from eight counties to six. This meant that both Wexford and Limerick, who had won promotion from Division Two, were recategorised as second-tier teams.

“It really took the wind out of our sails,” recalled Bonnar. “We had worked so hard to get promotion the year before and had beaten a good, young Clare team to win Division Two and we responded so well to the poor start we made in Division One to be able to build on that.

“The boys felt that they had earned the right to stay up and then it was taken out of their hands. It was a huge disappointment to do that to us in a board room and until this season Wexford weren’t able to get back out of there up to the top.”

That run ended this year when, under new manager David Fitzgerald, the county responded really well. Although unfancied for promotion they started the season like an express train and within the first two matches had defeated the supposed front runners Limerick and Galway, leaving their elevation all but confirmed less than half way through the campaign.

Bonnar is familiar with a number of the players, who were just emerging during his time in charge.

“There were some younger lads coming in who were probably a year or two off but I could see Wexford was beginning to pick up after a period when football had become very strong after Jason Ryan had got the footballers to an All-Ireland semi-final.

“Wexford won three Leinster under-21 hurling titles, which is a help in that being the best team in a province that includes Kilkenny gives hope that there is hope. I could have seen them coming through. There’s a huge passion in Wexford hurling to get back to those years when they were competing so well.

“They feel they should be up there more often than they are and maybe that’s what Davy has brought – a new intensity with a good bunch of young players and he’s huge experience as a manager and that will help the younger lads to kick on a bit more.”

He believes Sunday’s semi-final will be a great test for both sides.

“Tipperary are the best team in the country at the moment and Mick Ryan is a good man to have steadying the ship. There’s huge competition for places and he’s kept that going so that nobody can rest on their laurels.

“Then you’ve the players that won All-Ireland senior and under-21 medals in 2010 and they’re seven years older and more experienced and realise it’s a short window for an inter-county career and you only get limited opportunities and they’ve had a few but now the vibes coming out of Tipp are very good. They’re focused and trying to play to their potential.

“This semi-final will be great for them because Wexford have rattled a number of the bigger teams, going up to places like Salthill and reeling Galway back in after they were leading by six or seven points.

“Wexford are in bonus territory but this will be the real free shot for them – more than playing Kilkenny two weeks ago. That wasn’t a free shot, not when they’ll be playing them in six or seven weeks in the championship but they mightn’t meet Tipp again all summer.

“If they stay with Tipp and keep it competitive I think they’ll feel very positive going into the championship.”