Powerful Kerry U-21 side set for Galway semi-final clash 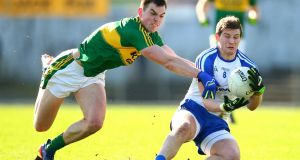 Saturday’s Eirgrid All-Ireland under-21 football semi-finals reunite three of the four counties from the minor semi-finals of three years ago.

Galway have emerged from Connacht instead of Mayo but as in 2014 Donegal will face Dublin in one semi-final with favourites Kerry playing Galway.

The minor title was won by Kerry who beat Donegal in the final.

The Player of the Provinces awards were announced on Thursday with Galway’s Michael Daly, who played a part in Sunday’s Division Two league title win by the seniors against Kildare, taking the Connacht award.

Meanwhile, Monaghan centrefielder Darren Hughes will miss most of the Ulster football championship. The 30-year old former captain tore a medial ligament during a club match with Scotstown last weekend.

“It’s not the cruciate so I suppose that’s kind of a bonus, but it’s too early to set dates or targets,” Hughes told Thursday’s Irish News.

“It’s a right bit away but it is what it is – I just have to get on with it. At the minute I don’t need surgery. They were afraid of a full rupture but they don’t think it is.

“I’ve just to look after it and hopefully it’ll heal well. I’ve been told to do nothing for the next two to three weeks. It all depends how it settles. If it doesn’t do anything in the next four [weeks] it could be an operation.

“I’ll have to see how the initial healing process goes and take it from there but it’ll be well on in the year before I see anything.”

Finally, Dublin hurlers will be without former All Star goalkeeper Gary Maguire, who has suspended for two matches after being sent off in last month’s league match with Kilkenny for striking opposing forward Liam Blanchfield.

Maguire will miss Dublin’s opening championship encounter with Galway at the end of May unless he successfully appeals the suspension.