Galway excited by prospect of getting Johnny Glynn back in harness 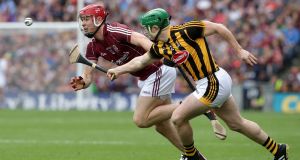 Last Saturday evening, Johnny Glynn didn’t so much line out as appear, in a religious sense, for Ardrahan in the Galway senior hurling championship. His presence was a reversal of the old GAA ritual of intercounty players flying out to New York for miraculous appearances in the hell-for-leather city championship up in the Bronx.

Glynn had committed to flying to and fro from New York to help Ardrahan revitalise their presence among the big hitters in Galway’s crowded club scene. He scored 0-1, was closely marked by Paul Killeen and looked understandably rusty as his club held out for a 0-16 to 1-12 win over Tynagh-Abbey/Duniry.

But that didn’t matter: what mattered was that he was back in the county and potentially available to Galway for the first time since deciding to light out for New York in the winter of 2015. Glynn’s appearance for Ardrahan strengthened the notion that he will ‘commute’ from JFK in order to play for Galway this summer also.

Cathal Mannion, asked about Glynn in a promotional appearance in Dublin, spoke enthusiastically about his return. Galway manager Micheál Donoghue confirmed that all parties were keen to push through with the unorthodox arrangement, saying “He’s anxious to give it a go and so are we.”

In the beginning, the idea seemed fanciful. Through the early part of this week, there were conflicting stories as to Glynn’s likely involvement. He met up with the Galway panel on Monday evening but didn’t train as he had picked up a slight knock in the Ardrahan game.

He was originally supposed to return to America after that session but by Wednesday, there was a suggestion that he would be part of Galway’s match day-26 for Sunday’s league semi-final in Limerick.

Cathal Mannion, asked about Glynn in a promotional appearance in Dublin, spoke enthusiastically about his return. Galway manager Micheál Donoghue confirmed that all parties were keen to push through with the unorthodox arrangement, saying “He’s anxious to give it a go and so are we.”

It is a bold initiative and draws immediate comparison to the colourful summer raids made by Pete Finnerty and Gerry McInerney, the dashing half back pair who starred on Galway’s 1987 and ’88 All-Ireland-winning teams while living in New York. But that was a different era: Galway were parachuted into the semi-final stage of the championship. It was a shorter season then. The contemporary demands are different. It’s unclear as to how precisely Glynn will divide his time.

An Ardrahan spokesperson confirmed that their arrangement with Glynn was entirely independent to anything that may happen with Galway. They will fly him home for club games when he is available to travel and play. It’s a significant cost for any club. But Ardrahan, the second most successful club behind Castlegar with 11 senior titles coming to a halt in 1978, are willing to remove the Atlantic as a hindrance.

Former Galway player Iarla Tannian plays centre back with the club and, with an attack composed around Glynn, they are optimistic about the season. The hope now is that Glynn can have the same impact for Galway as he had in his breakthrough season.

“I played two years with Johnny in ’12 and ’13,” says Tony Óg Regan, the Rahoon-Newcastle defender who was Galway’s resident full back and half back for a decade.

“Johnny would have come in just after the league finished with two other lads just out of minor, Shane Maloney and Pádraig Brehony, in 2012. We were just after a thumping against Kilkenny in the league down in Nowlan Park by about 27 points and we were kind of wondering within the squad where we were going.

“We had to go into a relegation match with Dublin just to survive in the division. And probably the older lads were questioning themselves, were they still up to it. We had trained hard all winter and to get a thumping like that left us really down in ourselves. And we were probably looking to see who was going to come in the gate and provide a bit of inspiration for us. And people probably thought we needed a few more experienced heads around the team like Damien Joyce and Ger Farraher and these lads to come back into the squad.

“But management went with the three lads out of minor and it was a ballsy move at the time. Johnny was probably the one that made the biggest impression. He came on in that relegation match and caught a couple of puck-outs and I remember him putting two of the Dublin backs on their arse with shoulders and tackles. He brought a real physicality to our forward line that had probably been missing for a period.

“And then over the course of the year in the championship, Johnny was brought in for championship games and from the first couple of training sessions we all found him very hard to handle in the air. A big presence and a good hand on him and really strong under puck-outs. Any intercounty player worth his salt will figure out how to cope with these things and how to manage him and in fairness to Johnny over the next year or two he started to up his game and not just be about winning puck-outs.

“His forward play improved in terms of bringing players into the game and becoming a scoring threat and running off the ball. But for me, the first impressions was of someone who was aerially very powerful and a great positive attitude and work rate.”

By 2015, that exuberance was one of the foremost characteristics of the Galway team that made it to that year’s All-Ireland final, losing to Kilkenny. By then, Glynn had established himself as a perfect target man, both artful and hugely strong under the high ball.

His opening goal against Cork in that year’s quarter-final was an off-the-cuff virtuoso run through half the Rebel defence before finishing at close range. David Collins, injured that afternoon, afterwards noted that it was a wonder Glynn wasn’t “milled” on his way through, before he corrected himself by adding: “Obviously I’ve trained with Johnny Glynn and taking Johnny Glynn down is like taking down a crane.”

Glynn scored 1-2 on a day when Galway’s forward line was in synchronicity and in a television interview afterwards, he gave a famous reply to the debate about the county only having one forward.

“That’s f**ken b*****it, as you seen for yourselves,” he said on reflex, quickly apologising. “Joe [Canning] is probably the best forward in the game but there are five other forwards out there and if you can pull a bit of heat off him you can see how well he can play.”

“That’s just his attitude,” says Paddy Stapleton, the former Tipperary All-Ireland-winning defender who hurled with Glynn in UL. In a column he writes for AIB, Stapleton stressed in early February that top of Galway’s priorities should be a petition to Donald Trump to deport Glynn. He rates the Ardrahan man as a unique proposition, “unlike anyone else in the country”.

“Micheál Donoghue notices it anyway. He doesn’t have a bad touch on the ground at all. When he wins it, he runs hard, but not too often down blind alleys. He still has the head up. He probably could do with taking a few more scores but he always brings his team-mates into it. In his presence and attitude on the field, he is not looking to do it for anyone other than the team. He has that hard-as-nails approach and is tough mentally, and I just think he is vital to them.”

Galway have been tantalisingly close for the past two years. In 2015, they beat Tipperary by a point in an outrageous All-Ireland semi-final. In 2016, they lost by a point at the same stage. “Who is to know Johnny Glynn wasn’t the difference?” he asks.

Galway’s progression to the last four of the league revolves around their characteristically unreadable show against Waterford, when they were both awful and inspired within one game. The day was defined by another Joe Canning shooting exhibition. A decade after his debut summer, Galway’s dependence on Canning remains clear and problematic. The return of a big, six-shooting attacker like Glynn could, as he puts it, pull some heat from the Portumna natural.

“It is really important to have that variety of ball winners and players who can play ball to hand and work off quick movement and first touch and also have lads who can win hard tackles and dirty ball and bring others into play. I think that’s where Johnny adds a new dimension to any forward line he plays with – that ball-winning ability and work rate. I think he will add an awful lot to the squad.”

The logistics and the possible jet-lag have yet to be accounted for. But the promise of Glynn plundering the sky and generally causing havoc in maroon is a welcome one in Galway. It is cavalier and against-the-grain, but so too are Galway at their best. Thirty years after Gerry McInerney sauntered from the heat of Manhattan to the whiter heat of Croke Park without a care in the world, Johnny Glynn’s transatlantic summer may just be a portent.