Galway shock Kerry to reach last ever Under-21 final

The Kingdom rattled by Connacht champions in Ennis, who set up Dublin decider 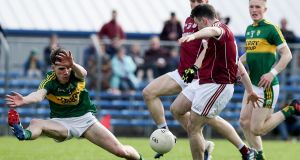 Galway’s Dessie Connolly scores the first goal of the game despite the effort’s of Tom Leo O’Sullivan of Kerry. Photograph: Donall Farmer/Inpho

A Kerry team strongly fancied to lift the last ever All-Ireland Under-21 championship were outclassed by a rampant Galway side in a thrilling semi-final at Cusack Park in Ennis.

The Tribesmen will now go on to meet Dublin in the final after a superb display which Kerry were unable to match.

They had a glorious start when Dessie Conneely blasted home a goal after just 21 seconds.

Kerry struggled to get into the game early on with Peter Cooke dominant at midfield for Galway. Conor Geaney got them off the mark with a free in a rare attack, before Michael Daly led a free-flowing attack and wing-back Kieran Molloy put nine points in it. Just 10 minutes had elapsed.

But then Galway failed to make the most of some excellent goal-scoring chances, with Robert Finnerty shooting wide and Eoin Finnerty unable to hold possession with just goalkeeper Shane Ryan to beat.

Kerry responded with a free from Sean O’Shea before Killian Spillane got their first point from play eight minutes from the interval.

Kerry goalkeeper Ryan went forward to convert a free from 45 metres but Galway had the final say of the opening half when Cooke got his third point of the match with a free to give his team a 1-9 to 0-4 lead at the change of ends.

And with Killian Spillane, son of former Kerry star Tom, finding his range they cut the gap to three points going into the final quarter.

But then Kerry midfielder Barry O’Sullivan was sent off after picking up a second yellow card and Galway pulled away with Colin Brady scoring a crucial goal two minutes from the end.

Jordan Kiely pulled back a late goal for Kerry but the Kingdom were unable to rescue the day.