John Kiely’s heroes do just enough to see off Tribesmen and seal a historic, deserved win 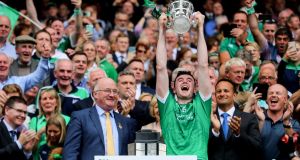 How could you have a dry eye? Limerick are all Ireland champions and Dolores O’Riordan’s voice is blasting from the speakers. The crowd are on their feet, clapping in rhythm, roaring every word. Limerick’s hurling life is changing in every way. Every possible way.

They came to Croke Park as underdogs and left it as made men. They survived a knee-knocking comeback, carrying an eight-point lead into injury-time and only emerging with only one of them to spare. It was 45 years’ worth of enough.

Any other result would have been a travesty. Galway hung in this final through muscle memory as much as anything else. They were outhurled, outfought and ultimately outlasted. Outside of David Burke and Joe Canning, none of their star men had impact. Limerick never allowed it.

All of Limerick’s pre-match fears fell away like autumn leaves. A quick Galway start? Not here. The champions gave up the first three points of the day, conceded the first goal, found only a single point from play from their forwards in the first half. Far from having to chase the game, Limerick were behind for only a minute of the game.

And even then, it was a situation they promptly rectified with their opening goal from Graeme Mulcahy. It came on 17 minutes, with Galway having just pushed 0-6 to 0-5 ahead thanks to a Joseph Cooney point. In more or less the next breath, Seamus Flanagan buried Pádraic Mannion with a shoulder as the Galway wing-back emerged with the ball, turning him over and allowing Kyle Hayes to whip a crossed ball to Mulcahy.

The Limerick corner-forward caught on the pirouette and for goal but looked to have lost his chance as the ball spilled towards the onrushing James Skehill. But Skehill overshot the runway and though Mulcahy had Galway defenders and the goalkeeper around him, it was the Limerick man who came out of the wreckage with a smile on his face. The ball dribbled over the line and Limerick had the goal their start deserved.

Other fears laid to rest? Johnny Glynn was having no effect on the game. Mike Casey spoiled everything that went into him, playing him on the basis that you can’t lose a fight you don’t suit up for. Casey didn’t contest a single high ball with Glynn, just made sure that the Galway dangerman didn’t get his catching hand anywhere near the ball.

And though they were shooting with less economy than they’d have liked, they were stitching just enough of their chances for what they needed. Declan Hannon strode forward for two in a row, Seamus Flanagan stuck a brilliant score on the stroke of half-time. It mean that Limerick, who’d have taken just being in touch at half-time beforehand, went in to the break four to the good, 1-10 to 0-9 ahead.

You’d have said Limerick could never have a better chance of adding another All-Ireland to their history, except that 1994 obviously supersedes all. But as next-best chances go, this was it. They were better than Galway everywhere, dominating them with an ease the scoreboard only hinted at.

This was it for Limerick. Speak now or forever hold your peace. They roared instead.

Kyle Hayes blazed into the second half, nailing three points from play in the first seven minutes. When Aaron Gillane added a free, the Limerick could allowed themselves to feel it was on. They were 1-15 to 0-10 up with a half an hour to play. If not now, when? If not these players, who?

Even when Canning foraged away for two scores of his own, Limerick’s response seemed nothing less than adamant. Tom Morrissey robbed Gearoid McInerney on the Galway 20-metre line, danced inside and pilfered a finish that put them 2-15 to 0-12 ahead.

Surely the fates wouldn’t allow them to slip up from there. Surely no god - hurling or otherwise - is so vengeful as to do the dirt on Limerick, of all teams, from position of nine points up in the 55th minute.

Well, they did their best. Galway didn’t perform here but they didn’t allow themselves to be disgraced either. A combination of their own cussedness and Limerick’s thoroughly understandable nerves saw the champions claw their way back. Burke stuck a point, Canning potted a couple of frees. The lead was down to five in the 67th minute.

Even when sub Shane Dowling jinked through for his goal straight after, Galway didn’t relent. Conor Whelan got in for a goal and Canning stroked another free. An injury to James Skehill in the Galway goal meant there’d be eight minutes of injury-time. When Canning roofed a 20-metre free to bring the margin down to two, four of those minutes still remained.

And when Niall Burke got in for his a minute later, Galway were somehow only a point down with ample time to close the gap.

But Limerick held out. Somehow, some way, they got across the line.

Heartbreak has its limits after all.