Future may be Limerick's but Galway aren't finished yet 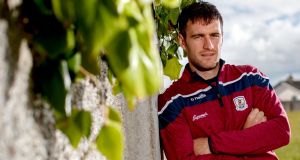 David Burke: Galway’s captain will be aiming to bring all his considerable experience to bear against Limerick at Croke Park. Photograph: James Crombie/Inpho

You don’t have to force the history out of this. For a start no other All-Ireland has featured two teams from outside the top division of the national league. Galway are looking to retain their title for the first time in 30 years whereas Limerick are on the verge of closing the most anguished gap in hurling, the one stretching back 45 years to their most recent triumph.

Sunday’s final also comes as the finale to a remarkable championship, organised on the experimental basis of round robins in the provinces, which delivered a sequence of riveting dramas played out against the blue skies of the best summer in over 40 years.

There is no doubt we are also seeing the two best teams in the final. Clare might demur, having beaten Limerick in Munster and after the thinnest of margins separated them from Galway at the end of a replayed semi-final, but they had chances both days and couldn’t take them.

It’s as well to state from the outset that it’s hard to separate the teams – not necessarily because they’re so well matched but because they bring different attributes to the final. So exuberant and irresistible has Limerick’s blossoming been throughout the summer that if the match is to end in a big win for either side, it’s more likely to be John Kiely’s young team

If experience is to drive a way through for the winners, Galway have the more forceful equipment in what is a fifth final in seven years, counting the 2012 replay.

The semi-finals were remarkable contests. Limerick saved a six-point deficit in the last 10 minutes before pulling away from Cork in extra-time. Galway twice took what looked like an iron grip on Clare only to have to survive a backlash that nearly toppled them.

It will be a fascinating last 10 minutes if Limerick are coming from behind or neck-and-neck and Galway need to keep them at arm’s length.

Throughout Galway’s protracted summer the one moment when they looked to be in danger of actually losing a match was after Aron Shanagher’s goal in Croke Park put Clare ahead for the first time at the start of the second half of extra time.

The two main leaders on the team, Joe Canning and captain, David Burke then had to go off in quick succession but somehow Galway stayed afloat and in fact could have won before their opponents had to conjure up the replay.

It has been the champions’ essential building block that the spine of the team was sorted out by Micheál Donoghue and from Daithí Burke at full back to Jonathan Glynn at full forward it is still strong but there has to be some question mark over Gearóid McInerney, not alone because calf injuries are so hard to manage but because the assurances about his recovery were a little too quick to emerge after he missed the Clare replay.

Limerick won’t repeat Clare’s mistake of leaving Hurler of the Year contender Pádraic Mannion in a free role if he has to move from the wing to deputise for McInerney.

The rest of the champions’ core is still formidable. Glynn has a considerable height advantage over Mike Casey and provided Galway use this as an option rather than the whole plan they can continue to reap the benefit of his omnivorous ball winning.

At the heart of the attack, who will be deployed to mark Canning? It’s not a role that Declan Hannon would normally play and if there is to be innovation such as asking Dan Morrissey to handcuff himself to Galway’s most important player, will that have a disruptive impact on Limerick?

Then there is also the free-form challenge of containing the movement and shooting of Cathal Mannion and Conor Whelan.

For Galway the uncertainty over corner back John Hanbury’s fitness masks the question of who would be better to mark Aaron Gillane, who threatens one day to blow apart some team. Presumably the answer is Adrian Tuohey but the other corner forward Graeme Mulcahy has been abrasive and a rallying point for Limerick.

The teams are well matched in terms of physique although the champions are stronger, which can have a major bearing on centrefield where the undeniably impressive Darragh O’Donovan and Cian Lynch nonetheless haven’t met a pair of big-game opponents like Burke and Coen.

Most people believe Limerick won’t be affected by the final as an occasion and cite the semi-final experience, which they handled consummately. But finals are different. Only once in the last 22 years has a team with no All-Ireland medallist rolled along to their first final and won.

Over the past 40 years defending champions have been more likely to win finals than lose them with the All-Ireland semi-finals the more common stumbling block. Galway are back – with one match left, experience, leaders and in Canning, the modern game’s most influential player.

It’s not patronising Limerick to believe that this team will win an All-Ireland at some stage because that’s a consensus view but there is equally a consensus that a more proven Galway will win this and that mightn’t be wrong, either.