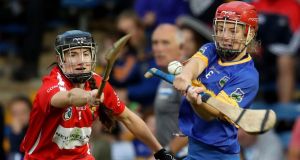 A second-half powerplay by Cork ensured that the champions’ place in the Liberty Insurance All-Ireland Senior Camogie Final was assured with a quarter of an hour remaining.

The 12-point margin does scant justice to Tipperary’s efforts, however, and it was probably a combination of tiredness creeping in from their workrate and Cork stepping through the gears that contributed to the Rebels’ increase in scoring rate.

Pamela Mackey picked up the Championship’s leading scorer Cáit Devane, who came into the game with 4-41 to her credit.

The Clonoulty-Rossmore star brought Mackey out towards the centre of the field, as Tipp opted to leave the pacy Sarah Fryday and Grace O’Brien inside.

Meanwhile, it was Hannah Looney dropping deep for Cork and the dual player from Killeagh went on to have a tremendous game, breaking up play and having a hand in a slew of scores.

In last year’s quarter-final, Tipperary’s hopes were blown apart by Galway by the end of the opening quarter.

Thus the first target must surely have been to not let Cork get a run on them early on and they achieved that, going in at half-time trailing by just 0-9 to 0-6 and running to the dressing rooms with very visible positivity.

They actually hit the front thanks to a successful Devane free, but Cork responded with a monster free by wing back and player of the match Chloe Sigerson, who would finish with three points, including a whopper from the middle of the field in the second half.

A couple of frees from Orla Cotter, who was unerring throughout and finished with nine points, gave Cork a lead that they would never yield.

Caoimhe Burke made an excellent save from Katrina Mackey and it is a testament to the organisation of the Tipperary defence, in which Karen Kennedy in particular shone, that it was the only sniff of a major a Cork side that had averaged 3-20 a game until this had.

Devane converted a couple more frees to keep her side in contention and after Sigerson, Katrina Mackey and Cotter pointed, Tipp responded with scores from Caoimhe Maher and O’Brien to leave three between them at the break.

Maher’s score could easily have been a goal and it came at the end of an excellent move involving Sarah Fryday and Ciardha Maher, but her rising shot flew inches over the bar.

Tipp missed two good opportunities to get within touching distance soon after the restart and were punished as Cork hit four points on the trot.

O’Dwyer stopped the rot momentarily but the Leesiders struck the next five, including a brace from substitute Linda Collins.

Devane and Sarah Fryday did find the target for Tipp but Paudie Murray was emptying his bench and in the end, must have been satisfied to have eight individual scorers, including a couple from his subs.

The moment everyone was waiting for arrived in the 58th minute, with the introduction of returning legend Briege Corkery after a two-year absence.

The Cloughduv player raised a cheer with her first touch but the primary goal had been achieved, with Cork back in the All-Ireland Final.