Limerick defeat Waterford by four points as both sides advance 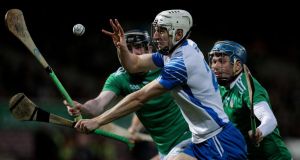 Limerick manager John Kiely is anticipating an extremely difficult Munster senior hurling championship, and expects a much-improved Waterford side to be in the mix this summer.

He was speaking after his much-changed team defeated their Munster rivals by four points at Gaelic Grounds as both sides advanced to the latter stages of the league.

Both Limerick and Waterford were guaranteed progress to the Division 1 knockout stages ahead of the final group game, with a semi-final spot on offer for the winner.

Despite a poor first-half performance from Waterford – in which the visitors scored just one point from play – Kiely was impressed with Liam Cahill’s charges, a side he feels will challenge for honours this year.

Waterford have failed to win a championship game since reaching the All-Ireland final in 2017, but the Limerick manager sees a very different Déise side this year.

“These guys are very well prepared, very well organised – they know exactly what they are doing and they are well able to do it. You’ve got to forget about the last two years when you are talking about Waterford. They are a formidable side with some fine hurlers, well able to take scores, and they work extremely hard for themselves.

“The bottom line is forgot about the past – it is all about 2020 and the next games coming around the corner.”

At the Gaelic Grounds on Saturday, Gearoid Hegarty scored a superb goal as reigning league champions Limerick made it five wins from five to secure their place in the Division 1 semi-final.

The powerful half-forward was top scorer for the winners with 1-5, but an impressive free-taking display from Pauric Mahony keep Waterford in touching distance throughout the game.

Kiely’s side opened the scoring as Aaron Gillane grabbed two frees in quick succession. The game’s first score from play came in the eighth minute as David Dempsey engineered enough space to slot over.

With Mike Casey dominating in defence, Waterford were limited to chances from deep, and it wasn’t until the 14th minute when Jamie Barron scored the visiting side’s first point from play.

Two well-taken frees from Mahony without reply narrowed the deficit to a point as Cahill’s side began to grow into the contest. However, the impressive Graeme Mulcahy had other ideas, turning his marker Conor Glesson to slot over his second point of the evening.

The opening goal of the game came just shy of the half-hour mark as the lively Lynch played a high ball into Dempsey, who laid it off to Hegarty – the St Patrick’s man blasted into the back of the net to make it 1-7 to 0-4 in favour of Limerick.

Dempsey knocked over another point after great build-up play by Lynch. Both teams had six wides in the opening half, but Limerick had managed 1-5 from play in comparison to Waterford’s solidarity score.

Waterford started the second half in better form as substitute Peter Hogan slotted his side’s second point from play directly after the restart. But a Gillane free, and a Reidy point in quick response, made it a five-point game.

A Jack Fagan goal gave Waterford a glimmer of hope, but two points from Hegarty and another from Gillane edged Kiely’s charges into an eight point lead.

Waterford finished with a flurry of scores to add some respectability to the final score, but it was too little too late despite a much-improved second half performance.