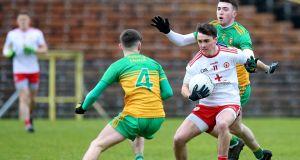 Tyrone will face Dublin in the All-Ireland Under-20 semi-final on St Patrick’s Day, after they finished strongly to see off Donegal and claim the Ulster title at Clones.

The Red Hands’ bid to retain their Ulster crown looked shaky at the halfway stage, when they led by just a point after playing with the wind advantage.

But they produced a storming second half display, with Darragh Canavan’s (son of six-time All Star, Peter) goal killing off Donegal’s challenge and Ethan Jordan picking off a brilliant five points from play.

Padraig McGettigan and Aaron Doherty kept Donegal very much in touch in the early stages of the match, cancelling out scores from Kevin Barker, Joe Oguz and Tiarnan Quinn. Tyrone led by 0-4 to 0-3 at the interval, but fired over five points while defender Oisin Walsh was in the sin-bin in the third quarter, three of them from Jordan.

And when Canavan smashed home a 49th minute goal, the holders were well on their way, ahead by seven points.

Donegal battled to the end, with two more Doherty scores and a Johnny McGroddy point, but they finished with 13 men after Conor McHugh picked up a black card and team captain Luke Gavigan was shown a straight red.