Donegal beat Monaghan in between the sheets of hail at Ballyshannon 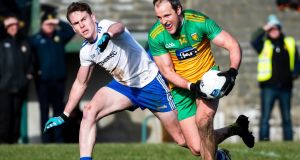 The remnants of Storm Jorge swirled around Ballyshannon as Donegal toppled Monaghan on Sunday afternoon. In between the sheets of hail that fell upon the Erne, Caolan Ward and Hugh McFadden goaled to return Donegal to winning ways after their narrow defeat at GAA HQ last weekend.

Declan Bonner’s men coughed up seven and five-point leads in their recent defeats to Galway and Dublin, but the shutters were pulled firmly down here by Neil McGee and company once their noses were sufficiently in front.

“Whatever about the performance, it was all about getting the two points and getting over the line,” said Declan Bonner, in no mood for another morale victory.

Monaghan had captain Ryan Wylie sent off on 47 minutes and they suffered a double blow seven minutes later. McFadden netted a second goal and goalkeeper Rory Beggan was sin-binned for dragging Patrick McBrearty to the floor in the build-up.

“When we went down to 13 men there was no opportunity at that stage,” Seamus McEnaney, the Monaghan manager, observed.

But the cord unravelled for Monaghan when defender Caolan Ward struck the game’s first goal on 32 minutes. The excellent Michael Langan off-loaded for the marauding Donegal halfback, who was forward-esque in driving a fine effort to Beggan’s bottom corner.

Langan is emerging as a tower for Donegal at centre field and the perfect foil for McFadden. He hit five points in a man of the match display, including two wonderful points to close the first half 1-5 to 0-2 in his team’s favour.

Bonner said: “we’re trying to build a really, really strong squad. We are getting there bit by bit. We aren’t there yet and we still have a distance to go, but we are moving in the right direction. We didn’t get our rewards in a number of games, but sometimes you create your own luck.”

Mindful of their recent defeats, Donegal put the game to bed when McFadden hammered in to an empty net as Donegal went route one for a breakaway goal.

Shaun Patton’s kick out got Donegal behind Monaghan’s full press. McBrearty, left one-on-one with Beggan was pulled down as he rounded the Monaghan ‘keeper. Not before he managed to pass for McFadden to finish off the move.

McEnaney said: “When we dropped to 13 men . . . Donegal are one of the best teams in the country at keeping the ball. When you give them a lead like that, it’s not a good place to be.

“It’s a defeat. A one-point defeat or a 10-point defeat is irrelevant. Donegal scored a second goal when we had a full press on. We’ll dust ourselves down and go again.”

Langan kicked over a late brace as Donegal took an impressive win. Bonner added: “it was important for us to get the two points. It was huge. We spoke about it during the week. We had been getting performances, but not the points on the board.

“Even though we didn’t get over the line against Dublin or Galway, there has been a really good atmosphere in the squad.

“I don’t think we did too much wrong in the games we lost. The goals were critical in those matches, but we defended well here. We defended well in the five games, but we had some lapses that were punished.”

Donegal aren’t guaranteed survival just yet, but this certainly eases their fears.

Next, in two weeks’ time is a championship dress rehearsal against Tyrone, another of their fierce old Ulster rivals.

Bonner chuckled: “You don’t even need to ask the question.”

With that, he was off into the evening, the mind already turned to the next move.