Limerick come in from the cold to make winning start 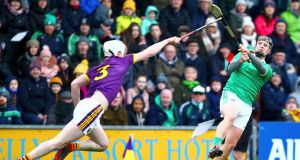 It’s a long time since Limerick got to open a league campaign as All-Ireland champions and they duly made the best of it in the cold-storage conditions of Wexford Park.

It’s also quite a while since they appeared in the top division of the Allianz Hurling League and so there was nothing forced about manager John Kiely’s positive response after a contest that Limerick controlled for the greater part but which also hung in the balance after a late surge by the home team.

“Delighted to get off the mark,” he said of his team, which featured 12 of the All-Ireland winning collective. “To come down here and get a result. It is a very hard place [and] my first time coming here and getting a result. I suppose the most important thing for me was the players.

“I was really interested to see how they would take to the game. We are only back two and a half weeks; we have the Fitzgibbon Cup. It was a bit of a test coming down but the boys dug in, worked really hard and [I’m] thrilled with the shift and attitude they put in.”

Performances were encouraging for a team that has hardly played since last August and they rolled up their sleeves and had enough craft to keep Wexford at a distance, even though they misfired at a sufficient rate almost to treble the opponents’ tally of wides.

The home side started well and fired in a goal in the seventh minute after a searing run by Cathal Dunbar melted the Limerick defence. Within minutes though, a clever piece of interplay by Aaron Gillane and Cian Lynch created a chance for the former and he squeezed the ball into the net.

Wexford looked to suffer a bit by keeping Kevin Foley as a sweeper because Limerick largely held their shape and restricted scoring opportunities. Even in the second half when with the wind, they might have tried occasionally to go long, although the visitors dropped really deep themselves and at times had just one forward in attack.

They did, however, manage a second goal before half-time with another running attack, which culminated in Jack O’Connor bundling the ball home.

Facing into the wind in the second half with just a three-point cushion, 1-10 to 2-4, Limerick stayed in front with some excellent long-range free striking by Diarmaid Byrnes and commendable work rate all through the team, but especially evident in the graft of the Morrissey brothers, Tom and Dan.

There were two key moments in the match. In the 27th minute Limerick full forward Séamus Flanagan – minutes after a bravura point, flicked over after dispossessing two defenders in turn – trudged off on a red card, together with opposing full back Liam Ryan after referee Fergal Horgan had sorted out a sideline fracas.

Wexford manager David Fitzgerald was unhappy as he suspected referees were ‘under pressure’ to make examples of players but in general there were few complaints about the sendings-off.

He wasn’t exaggerating though when he claimed that his side could have won. They timed their charge impeccably, cutting Limerick’s four-point lead to one in the space of a few minutes and after Darragh O’Donovan, with a trademark lineball cut, and Gearóid Hegarty had pushed the margin back to three Conor McDonald hit the post and Limerick goalkeeper Nickie Quaid somehow blocked the follow-up.

In the frantic exchanges that concluded the match, Wexford also tried a quick free that their manager thought should have been pointed.

“I think it is a game we could have won,” said Fitzgerald. “We hit the post at the end and the lads are after telling me we hit the goalkeeper’s helmet, as well. We had two chances which we didn’t take – one of those was a free which Liam Óg [McGovern] took quickly and he’s probably saying to himself inside that we should have put that over the bar.

He also felt that the double-red card had influenced the outcome by creating extra space in the Limerick attack, which was exploited by Aaron Gillane in particular.

“The sending off had a massive bearing on the game because you are taking two bodies out of that side of the field. The last thing you want is for the Limerick forwards to have more space.

“I thought we coped pretty well, but if you take our injury list there are probably four backs that will end up playing that weren’t there today. It is very hard to do that but the lads did very well. “