Kilkenny get a grip of Cork and refuse to let go 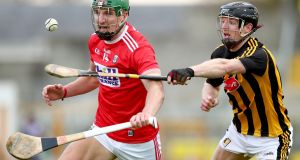 Déjà vu either way. No team is judged more or judged less on results like this than Kilkenny. All that actually matters is how they eternalise in time out of mind.

What does set this result apart is the delivery of it. With new flesh and bones of a team, Kilkenny got a grip on Cork early on and never let go, visually and spiritually more competitive than the opposition that’s typically their best measure. Nine different scorers, from defenders Conor Delaney and Paddy Deegan to replacements Richie Leahy and Conor Browne, easily proved more than the measure of Cork.

More than the actual result that seemed to satisfy the home crowd, who also got behind their team and never let go.

Only for Kilkenny, and particularly Brian Cody, the league is a concept by which they measure their immediate gain. Given his list of absentees, the Ballyhale Shamrocks crew plus central defenders Cillian Buckley and Padraig Walsh, Cody could well take some long-term gain too, not that he ever sees it that way.

“I hope it’s not a bad sign,” he joked about winning his first game, after losing his first the last two years. “Because we had a bad start last year, and it didn’t do us any harm in the league. Obviously it’s good to get off to a good start, at home as well. We have to go to Ennis next week, which will be a big test for us, so we’re glad to get a win early on.

“We lost the first two games last year, and we went on and on and took the challenge in front of us. We took every game as it came but we wouldn’t be not trying to think of winning the thing, or winning every match in the competition. It wouldn’t change my perspective. I don’t think there’s ever anything to be gained by saying to lads ‘it’s not too serious, whether we win or lose’... I don’t think that’s a good approach to anything.”

Kilkenny certainly stepped up from the defeat to Wexford in the Walsh Cup semi-final earlier this month. The crowd of 8,274 were enthusiastic – though exactly half of the same fixture this time last even, played under lights on the Saturday evening at Páirc Uí Chaoimh, when a bumper 16,189 showed up (although that was a double-header with the Cork footballers, who played Tipperary in division two).

Neither team waited around, Cork firing off first. Aidan Walsh hit their opener in his comeback game, and Patrick Horgan was quick off the mark too, Cork edging their noses in front. Slowly, Kilkenny’s defence closed up, Huw Lawlor taking control of that worrying full back position, Paul Murphy and Tommy Walsh providing plenty of safety either side.

Martin Keoghan and Richie Hogan were both late withdrawals with injury, so up stepped Kevin Kelly for the free-taking to good effect, hitting six placed balls in the first half to ease Kilkenny 0-6 to 0-5 in front on 26 minutes; a minute later Richie Leahy, not long on the field for the injured Ger Malone, shook the Cork net from close range – and from then on Kilkenny held control.

Cork got it back to the minimum at the break, 1-8 to 0-10, Cormac Murphy showing his worth back at midfield when hitting the first of four big points, Declan Dalton putting his hand up with a sweet sideline. Patrick Horgan was typically sharp from the placed balls, but their threat closer to goal was already disintegrating, and Cork manager John Meyler sensed it.

“Disappointed with the result,” Meyler said afterwards. “We started off really well, the first five, 10 minutes, then Kilkenny just got going, tapped over a few points, got the lead, and that was it really. We want to competitive, win all the games we play, and blood new players, so that’s three objectives. We lost today, weren’t competitive enough for my liking, but he (Murphy) is a definite plus, Dalton got through a lot of ball, and that’s what it’s about.

“But for the middle of January, Kilkenny were definitely sharper than us, their movement better. We’ve a few critical players missing, that’s not an excuse, but bit by bit they should come back, and we should be better by the end of the league, really.”

Among those missing players are Mark Coleman, Shane  Kingston, and Robbie O’Flynn, on Fitzgibbon Cup duty last week, and Meyler wasn’t going to press them: “I’m not going to do that. We need them fresh for May and that’s it.

“Aidan Walsh has been out two or three years, and we’re just trying to find players to compliment the ones that were missing, and again Murphy did that, go four good points from play, and that’s a plus, but we’d be concerned that Kilkenny were winning all the high contested balls, coming out with those, and so Wexford next week be something to look forward again.”

Seven minutes into the second half Billy Ryan cut through at considerable pace from the right to claim Kilkenny’s second goal, set up by the energetic James Maher at midfield. Conor Browne brought that same sharpness and energy when replacing Maher, and Delaney’s two points from wing back, John Donnelly also adding two from wing forward, helped spread the optimism around the team. Kelly finished with 0-8, even if missing two relative sitters, and Eoin Murphy got one of the loudest roars of approval when pulling off a brilliant close range save from Horgan on the hour mark, even if that goal would likely have come too late to save Cork.

“You’d be looking for work rate to be strong and it was. We had a lot of players out there who would have limited experience for sure, but it’s encouraging,” said Cody.