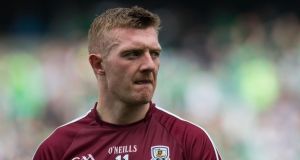 Joe Canning scored 1-10 for Galway as they were beaten by Limerick. Photograph: Tommy Dickson/Inpho

Haunted by Graeme Mulcahy’s goal, on the quarter hour, grounding that fraction too soon, his brave recovery later to stop Seamus Flanagan resulting in concussion, though keeping Galway on life-support. Some early puck outs too tempting for Limerick. Rating: 5

Also left wondering why, how, Graeme Mulcahy was let in for three, Galway remember having just gone a point up. Lacked some usual reliability in the face of Limerick’s rage, looking a little dazed and caught for pace too. Rating: 5

Stuck glove tight on Aaron Gillane, mostly rock solid in the frequently crumbling walls of the Galway defence, but still mostly flood control against the Limerick dam busters. Occasionally rash clearance but still assured of a fourth All Star. Rating: 7

Kept some tabs on the wildness of Seamus Flanagan in the ultimately futile resistance early on, though usual man-marking instincts too slack. Called ashore before the hour in the bailing of the then sinking ship. Rating: 5

Lost his Hurler of the Year form when Galway needed it most, strangely guilty of miss-shooting and passing, lacking usual fluidity and mastery, instead of whipping around every corner. Managed one score early on when Galway needed it badly against the lording Limerick half forwards of Tom Morrissey and co. Rating: 6

Persevered in the face of so much adversity, the injury clearly imposing on his usual will, but caught for some turnovers and skewed passes. Typically central to Galway’s late surge, too late to salvage the damage done by Kyle Hayes. Rating: 6

Lacking his usual versatility when Galway needed it most, occasionally caught for pace too, the Galway half back line most visibly malfunctioning in the first half in the face of Limerick’s machine. Stuck to his task, somehow. Aidan Harte: 5

Lost his usual defensive link and too often marked absent against the fiery presence of Cian Lynch, who took him for a point early on and never looked back. Found his feet too late. Rating: 6

Brought his roaring form into the final and one of Galway’s few standout performers in the first half finishing with three points all from play, holding solid ground with Darragh O’Donovan, just not quite often enough. Rating: 8

One of the rebels for the cause when Limerick had the Galway backs, and forwards, to the wall, finishing with three points from play, just couldn’t find or create the space needed to exert usual influence. Rating: 7

Wow. Played another presidential role, lacking a little in the first half before taking full command in the second, finishing with 1-10, bringing Galway back to within a puck of victory when the Gods would have doubted it. Imagine if Galway... Rating: 9

He came in with 1-17, and yet kept scoreless? Galway tried anything and everything to bring him into the game, Mike Casey having none of it. His stunted performance central to the winning and losing of the game. Rating: 6

Tortured early on, the entire game in danger of passing him by, suddenly re-energised and with directive in the closing frenzy, in the theme of Galway’s game. His goal brilliantly too late. Rating: 7

Doubts about consistency and mood unfortunately proven, one of the many off target in the first half, and left with nothing in the end, replaced by Jason Flynn just before the hour. Rating: 5

All kind and everything that he’s capable of was left behind, caught for pace and accuracy and even a sign of the svelte passing that often marks his game. The final that never was. Rating: 5

Running repairs worked too although just too late, admitting afterwards Limerick “blew them apart”, Galway unable to play their own game of hurling until it was too late. Rating: 6