Galway have something to cheer about as minors win again 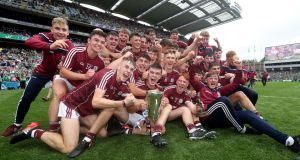 Galway cruised to a third minor All-Ireland title in four years as Jeffrey Lynskey’s side continue to excel at the grade to claim a 12th title for the county.

10 points from Donal O’Shea caught the eye for Galway, while full-back Shane Jennings was rock solid, but with eight different scores from play, right across the pitch Galway showed they have plenty of talent coming through to feed the next generation.

After a brilliant start Kilkenny held a 0-4 to 0-0 lead and were 0-10 to 0-9 up at the interval, but they were outclassed after the break as Diarmuid Kilcommins and Dean Reilly pointed the Tribesmen towards the title.

Afterwards Lynskey praised the character and dedication of his side, and he recalled some tough snow training as key to their undefeated 2018.

“We couldn’t get a pitch, I brought my two kids up to my own club [LIAM MELLOWS]and believe it or not I got three shovels to try to move the snow off the astro turf,” said Lynskey.

“After about 25 minutes one of them bolted, he said, ‘Dad, this is lunacy’. So what we did was I looked out and the tide was gone out in Ballyloughane beach. We had 54 lads there and we trained for an hour and a half.

“If you’re looking for one moment that encapsulates the whole year, it was that. It was the character they showed. It was minus whatever, four or five out, and they lads came out, they were falling into puddles of salt water, sea weed, you name it, the whole lot and they didn’t shirk it.

“Because at the end of the day they wanted to get to Croke Park, to wear a Galway jersey. In fairness to them in the second-half today they showed that.”

The key period of the game turned out to be the opening exchanges when Kilkenny were totally dominant, held the upperhand on Galway’s puck-outs, scored four unanswered points, but also failed to cash in all their chips. Four wides in that time allowed Galway to get back into the game and when O’Shea pointed a penalty it started Galway on a run of six unanswered scores.

Kilkenny manager Richie Mulrooney conceded his side were bettered by a stronger outfit.

“It was a great effort. Seven points might have been a small bit harsh on us. We had our very very good goal chances and didn’t manage to take them,” said Mulrooney.

“We probably needed to score some of those wides, but that’s not to take away from Galway’s performance.

“Most years you can look back to a moment when the All-Ireland winner win a minor title and say ‘there is a little bit of luck we got’. That Galway team needed no luck this year. They were as good a minor team as I’ve seen because I know our minor team was a really good team.”

The free taking of Conor Kelly and a couple of sweet sideline cuts from Ciarán Brennan and Jack Buggy were the cornerstones of Kilkenny’s first-half lead, but in O’Shea Galway had an in-form scorer. After he pointed his penalty he hit two from open play, then four placed balls including one from his own half just before the break.

After the break, the introduction of Colm Cunningham and Sean McDonagh in particular gave Galway a new lease of life around midfield and they began to overpower their opponents.

Two wonder points from Kilcommins saw Galway hit five of six points between the 32nd and 40thminutes, and despite Kelly’s frees and Kilkenny laying siege in search of goals, Galway and Jennings in particular stood firm.

2 Fiona Coghlan says quarantine ‘would be incredibly tough’ on Ireland

4 Simon Zebo is heading back to Munster next season

Real Madrid defeat is story of Liverpool’s season, says Klopp 06:35
Rugby Stats: Josh Van der Flier’s versatility keeps him out ahead of his rivals 06:45
Double-headers and late evening throw-ins off the cards for this year’s Allianz Leagues 06:00
Fiona Coghlan says quarantine ‘would be incredibly tough’ on Ireland 06:00
Gerry Thornley: Simon Zebo’s return looks like good business all round 06:00
Crossword Get access to over 6,000 interactive crosswords