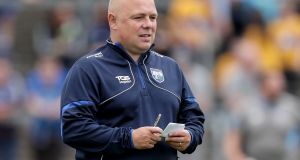 GAA officials are considering how to structure a condensed championship from mid-October with hurling’s provincial groups in Leinster and Munster likely to be set aside due to time constraints.

That could mean a return to the old provincial set-up which included All-Ireland qualifiers or a straight knock-out championship entirely, which existed until 1997.

Either of those scenarios would surely appeal to Waterford who failed to win a single game in their provincial group campaigns across 2018 and 2019, losing seven and drawing one.

McGrath said the reality is that even two wins in the cut-throat Munster group, or four points, hasn’t been enough to guarantee teams qualification in the past two seasons.

“If you’re asking me a straight up question as to what would suit Waterford, I think the old system suits Waterford,” said the 2017 All-Ireland final manager.

“I felt they were going to perform well against Clare last year in the first game too and they didn’t win that one. But this year I felt there was going to be a real energy in their performance against Tipp in Walsh Park.

“I was saying to myself that we’d be going into the last game against Clare possibly on four points having hopefully beaten Cork as well. So they could have been on four points going down to Ennis.

“That was just me working out the permutations in my own head but I thought there was a better chance of getting four points this year, for whatever reason.

“But if you asked me a straight up question in terms of what would suit us best, like, if they draw Limerick down in Thurles in a one-off game, a knock-out game, a Munster semi-final maybe, I’d fancy Waterford.

“Maybe I’m being unreasonably biased or blinkered but I’d always fancy us in a one-off championship game. But for the four games it seems to be hard to sustain that.”

McGrath’s five-year term ended after the 2018 season, clearing Paraic Fanning to step up in 2019 and Liam Cahill is now in position.

Waterford showed solid Allianz League form under the Tipperary man and began the campaign with a morale boosting narrow win over Cork.

“There were high-energy levels and real connectivity between everyone, supporters included,” said McGrath. “I think there was a real stamp on how they were going to play, in terms of using the ball, keeping it short, middle third fairly condensed and breaking forward in waves. Look, they know what they’re doing and they have good players there. The perception is probably out there that we’re at a low ebb, expectation is low, and I think Waterford are very dangerous when they’re like that.”

McGrath, who is helping out Laois minors this season, claimed Waterford’s dip in 2018 and 2019 was understandable on one level.

“I think a natural curve for any team is to have a little dip in that and I think the dip has come,” he said. “I think there’s real optimistic signs now that that dip has kind of flattened . . . I was thinking about it . . . and that’s six years now that many of the boys are on the go, but some of them are still only 23 or 24.

“It seems like they’re around for years but they’re actually young chaps. Conor Gleeson and these fellas are young chaps. With us and trying to get over the line in ’17, it was similar to Clare in ’13, obviously we didn’t win it and Clare won it, but Clare had a natural dip after that. It happens. I think that’s as much of a reason [for Waterford’s underperformance] as anything else.”

Longford hand Cork a walkover in final Division 3 match 15:57
Johnny Sexton aware of how Ireland can offer fans an escape 15:34
Jason Holder ‘disappointed’ in Australia and Pakistan for not taking the knee 13:17
Arsène Wenger: Arsenal was a matter of life and death to me 10:06
Extremes of sweet and sour for Solskjaer as Man United show signs of revival 10:08
Crossword Get access to over 6,000 interactive crosswords