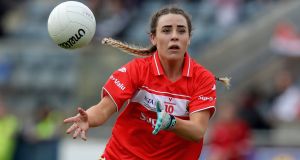 Orlagh Farmer has made a very firm resolution for when life gets back to normal: “I will never, ever complain about a training session again,” she laughs.

The last one she attended was back in March with the Cork senior football panel, two days before everything shut down. “Little did we know then,” says the six-time All Ireland winner, “that that would be the last time we’d see each other for a few months.”

Farmer has, though, put lockdown to good use, finishing her PhD, which focuses on the reasons why so many young girls drop out of sport at an early age. And as a player, coach, qualified PE teacher and lecturer at the Cork College of Commerce in early childhood physical activity, she is better placed than most to understand the challenges on that front.

And it’s her life’s passion to find solutions. While there are multiple reasons for why an estimated 50 per cent of young girls drift away from sport, she says that one of the major factors is that they simply stop enjoying it.

“It could be through boredom, coaches being too strict, the girls just lacking confidence. What came through massively in my research is that fun and enjoyment are the biggest motivators for them staying in sport.”

So, she has been using her research to create a series of online videos the past three months largely aimed at those girls, the sessions combining lessons in the basic skills of football with everything from dancing to Tai Chi, all designed to make them both instructive and fun.

“I was in the car one day and Ed Sheeran’s Galway Girl came on the radio and I was like, ‘hold on a second’ – I just got this mad notion to combine the skills of Gaelic football with a dance routine, because at the end of the day, girls love dancing – and they just want to have fun. I tried it out and it was really positive – although I fell through my decking and nearly broke my leg. Apart from that, it went well,” she laughs.

She has, she says, been blown away by the reaction. “Initially it was only supposed to be for a week, but because I got great feedback from clubs all over Ireland I decided to keep it going. I never expected it, but they really took off.

“I started with a five-day football challenge, with a different focus each day. There was Monday Fun Day, Target Tuesday, Workout Wednesday, Tai Chi Thursday and Fitness Friday. I was just trying to be creative, to put some fun in to it. They feed in to my research, it’s all about promoting sport for girls, that’s what I’m passionate about. And the worry was that during lockdown, more girls would drift away from football. This was all about keeping them involved, encouraging them, getting them to work on their skills and, most of all, to have fun with it.

“Even though I’m submitting the PhD, it’s only the start of the journey, I want to develop it further and just give back – because football has given me so much. I have an understanding now of what girls want and what works, so I want to be able to educate coaches, teachers, parents, give them an insight to what I’ve learned.”

What she’s learned herself during this period is that “football isn’t everything, you have other things going on in your life, but at the same time it makes you appreciate what you’ve lost. It brings back the hunger and the bite. As they say, you don’t know what you’ve got till it’s gone. It’s all just opened my eyes to how much I love it.”

Looking forward to playing for your county again come October?

1 Champions Cup draw: Connacht drawn with Pat Lam’s Bristol and Simon Zebo’s Racing
2 Henshaw the only change as Andy Farrell names Ireland team for Paris
3 Gordon D'Arcy: Ireland must go after victory by frightening France into mistakes
4 Seán O’Brien: Anger over my parents’ break-up never left me
5 Cian Healy: ‘Realistically I got away with murder when I was younger’
Real news has value SUBSCRIBE