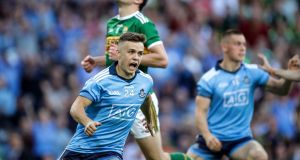 We’re a few questions in and biding our time when Eoin Murchan is asked about the goal. It’s nice to know he’s tipping away in the local park, content to await any 2020 championship play out if and only if it’s safe to do so, but after single-handedly producing the score of last summer – the high noon moment in Dublin’s historic five-in-a-row – all we really want to know about is The Goal.

Was it rehearsed? Who else saw it coming? Did he consider passing? What about the steps? And while we’re at it is he truly faster than Jack McCaffrey?

Murchan reckons he hasn’t re-watched it since the aftermath of that All-Ireland replay win over Kerry, and yet vividly recalls it in his gently self-deprecating way: an “alien” to goalscoring, yes, so maybe just the wrong player, in the right place, at the right time.

“I’m not really sure what exactly was in my head,” he says, after being taken back to the throw-in for the second half, the teams tied at 0-10 apiece, when Kerry midfielder David Moran somehow fists the ball down into Murchan’s path: exactly 10 seconds before the ball hits the back of the net.

Murchan doesn’t even afford himself a little fist pump after his shot flies straight into the Kerry net, despite it being his first championship score for Dublin. Though better known for his tenacious defending, there’s always been some attacking aspiration, going back to the first steps with his club Na Fianna.

“Goals are totally alien, in terms of the intercounty set-up, but all the way up, from under-13 we would have tried and tried and tried almost that exact same move. And to be honest it just didn’t come off. On this occasion, I was just fortunate that it did.”

And what about the number of steps Murchan took?

“I know there’s a bit of debate around that, but to be honest if you put yourself in the position of that referee, it’s going to be hard to know what’s going on, in fairness. The goal makes a difference, but I actually find it strange that it gets so much focus.”

What is certain is that whatever Murchan might lack in his 5ft 5in height, he makes up for with his leg speed – and skill. Now 24, he’s never had any specialised speed training, but credits his athletics and basketball involvement at school in Belvedere for that side of his development.

Fast enough to beat McCaffrey, rumoured to be the fastest on the Dublin team?

“Well, we’ve never actually raced, but I would definitely back myself in that race, if we did, 100 per cent,” he says, this time more teasingly. “I did a lot of athletics in school as well, but more the middle distances, actually, I didn’t do anything sprinting at all, although I’d loved to have done it. It was more 800m up to cross-country.

“Playing rugby with Clontarf and my school, at scrumhalf and wing, there was a lot done in speed development, but more just the need to run fast to get away from people. Same as on the basketball court.

“I played every sport, they all had their benefits for football, such as the hand-eye coordination of basketball, and the one-on-one defence. Everyone has their different strengths and weaknesses, some have size, some have speed, some have skills, and one of my attributes is being fast, but it’s not something I chose to work on because maybe I’m not as big as others. It’s something I’ve always had, and just one of a number of assets.

“To be honest it [height] has never been a hindrance, not in a team sport, where it always requires more than one person.”

Unless perhaps that person is Michael Jordan, and his style of play as recently captured in the Netflix series The Last Dance: although he may not have got away with it in the Dublin dressingroom.

“Yeah, I was absolutely gripped,” says Murchan, “but that style of leadership works in certain situations, and doesn’t in others. We’re very much a player-led group, hold ourselves accountable, so I’m not sure it would work, whereas in basketball it is a smaller team, and maybe one player can make all the difference. That’s not the case in football, and I’m not sure it’s what we’d want, that the Jordan style would work in many instances.”

Except maybe in the making of The Goal.

– Eoin Murchan was speaking in support of Aoibheann’s Pink Tie, the charity partner of Dublin sponsor AIG, which provides support to children and their families fighting cancer across Ireland.