GAA could install seats on Hill 16 when Croke Park reopens

John Horan has suggested up to 42,000 fans could be allowed in with 1m social distancing 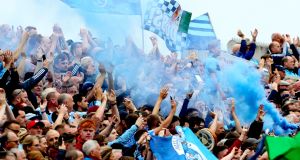 The Hill 16 terrace at Croke Park could become all-seater, as part of temporary measures put in place by the GAA to allow supporters to attend fixtures at HQ.

And GAA president John Horan has suggested up to 42,000 fans could click through the Croke Park turnstiles later this summer, if the Government were to reduce social distancing from two metres to one metre.

Croke Park can hold up to 82,300 spectators, but with social distancing likely to be difficult to maintain on the Hill, seats could be installed on the famous terracing when the stadium is allowed to reopen.

Speaking to Na Fianna GAA TV, Horan said: “We’ve already worked it out that if the Government allow larger crowds to gather, over the 5,000 that they currently have, we could probably put 21,000 into Croke Park safely. The operations team in Croke Park have mapped it out.

“It would cause practicalities in terms of there’d be an element of lottery for tickets. Premium ticket holders would probably have to get a credit into the following year and just do a lottery on the tickets that are actually there available for games going forward.

“Until social distancing is scaled back, we just won’t be able to pack Croke Park, it is our intention to get it open and get it going once the inter-county games start. If it goes back to one metre, we’ll be able to double the attendance to 42,000.

“There’s an issue over the Hill whether we’d have to put seating in there because really controlling crowds on terraces is always going to be a nightmare going forward.”

The 2020 inter-county season is set to get underway on October 17th, with club competition to resume on July 31st.