Kilmacud Crokes send out signal of intent with Boden win 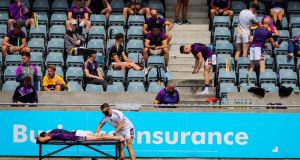 A Kilmacud Crokes player receives physio treatment as the team changes in the stands at Parnell Park. Photograph: Inpho

And on the 140th day, hurling rose again. Twenty weeks on from the last time there was a Sunday game to go to, we filed into Parnell Park for the first round of the Dublin championship. Kilmacud Crokes whipped Ballyboden by a margin that would raise plenty of eyebrows in any other context but this was a group game and Boden should be okay to come again over the next few weeks. This wasn’t a day to get too up or too down about.

It was more just a day to be. To find yourself in the groove again, letting the senses fill again with a game to be at. All those weeks where we were kicking our heels, filling the time, getting through it all - this is the kind of thing that was missing. Nothing magic, nothing dramatic. Just the simple, warming act of being at a game.

“Where else would you want to be on a Sunday afternoon in July?” said Crokes manager Aodán de Paor afterwards. “I was just saying to the lads beforehand, they may never get a chance to play championship in July again. We have all our countymen in there, everyone together. It’s a good place to be.”

The first day back, you find a strangeness in the most ordinary things. The dressing rooms are off limits for now so when the teams arrived, they were sent to either end of the main stand to get changed. Kilmacud dutifully filed down to the low side but didn’t go far enough and a steward had to hoosh them all the way to the wall. “Sorry lads,” he shrugged as they shifted down, slightly baffled that another 10 metres was going to make much of a difference. “Only telling you what I was told myself.”

The pitch itself looked like it had been flown in from the All-England club once Wimbledon was called off. When Anthony Daly was Dublin manager, he looked grim-faced down at the pitch one night after a particular brute of a game and said you’d need a shovel to rise the ball on it. This one, you could have rolled fresh eggs the length of it and not cracked a single one.

And in the stands of course, there was barely a soul. Both clubs were allowed to bring 90 people, including players, subs and backroom teams. There were no shops open, a few stewards here and there and around 20 media people - it would have been fewer but TG4 were showing the game live. All of which left in or around 50 places free per club for supporters to come along. it felt weird. It was weird.

But the game is the game. Crokes haven’t won a Dublin title since 2014 and have lost three finals in the meantime. For a club their size, a title challenge should be on the cards most years and they came out here like they meant it. They were four up inside the opening 10 minutes and though Boden drew them back level through the second quarter, a 1-2 spurt just before the break kicked them into the clear.

“They’ve have been a bit of a bogey team for our lads over the years so that was pleasing obviously enough,” said De Paor. “We’ve worked hard the last three weeks. You don’t know how to prepare your team when you have three weeks to do it. The first two weeks we worked hard and maybe struggled a bit in challenge matches and in training. But it seemed to pay off this week.”

Crokes were certainly quicker across the ground and snappier to the ball as the game wore on. Ronan Hayes stuck his penalty just before half-time and they had another goal on the board seven minutes into the second half from corner forward Alex Considine. Wing-forward Marc Howard stroked him their third in the 44th minute to get them out the gap and they could even afford to lose free-taker Oisin O’Rorke to a straight red soon after without losing momentum.

In the end, the 14-point margin was a fair enough reflection of the first day back for both sides. When it was over, they trooped back to their respective sections of the stand and the team physios popped a massage table on the sideline to work over tired limbs. Same as always, except not really.

“So many things are different obviously,” said De Paor. “For me, not so much the day but the preparation for it has been really good. All the lads have been in. The Dublin lads have been with us for the last couple of weeks and for all clubs there must be a feeling of togetherness at the minute. If you were to ask the lads there, I’d say they’d like to have the championship this way every year, where you just have your window and you can go at it with everyone. That gave the lads a real buzz.

“The lads have been working hard on their own. We’re a fairly young team compared to Ballyboden as well I suppose, which definitely helped with the day that was in it. the second half, we got in front with the couple of goals and what I was particularly happy with was that we didn’t really let them back into it. We kept working. It’s often a thing with us, they tend to kind of drop off a bit when they get a cushioned. But they didn’t. The workrate was very pleasing.”