Initially seen as an existential threat, the era taught Gaelic games the power of the big occasion 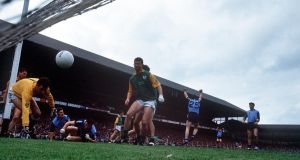 Jack Sheedy scores a goal for Dublin in the Leinster SFC preliminary round replay against Meath at Croke Park in 1991. Photograph: Inpho

It’s funny to look back at it now but the Jack Charlton era in Irish soccer was initially viewed as some sort of existential threat to Gaelic games. There was a strong undercurrent of apprehension that with the world opening to Irish soccer, the (national) game was up.

Charlton’s primary significance was delivering qualification for World Cups and initially Euro 88, effectively channelling the power of international sport. It was very potent in a country that down the years had to content itself with watching through the windows of other countries’ involvement.

Yet even this vicarious process had raised the profile of soccer during the television age and was acknowledged as such by the GAA (at 4.32 of the McNamee Commission Report in 1971) beginning with the broadcasts from the 1966 World Cup in England.

Mexico 1970 and colour television added steadily to the impact and it was the wistful contemplation of many children of the era – and probably quite a few adults as well: imagine if we were there.

By neat coincidence the man who would make it happen was hidden in plain sight among the England panels at both tournaments.

As has been noted by many, Jack Charlton’s capacity to be who he was made him popular. He was not one of those stage Irish-impressed visitors – however well-meaning they may be. He didn’t go on about creamy pints of Guinness, even though by consistent testimony he could put them away like a native.

He visited Croke Park for big matches and was suitably impressed by hurling but sufficiently suspicious to wonder why Gaelic games hadn’t caught on anywhere else.

Peter Byrne, friend and biographer of the Ireland manager and who covered what became the greatest era in Irish soccer for this newspaper, said that Charlton was impressed by football in one sense: that it was hard, physical and mostly honest – traits that reflected his own values.

Byrne also told the story about a joke concerning an Irishman on ‘Mastermind’ who is painfully reduced to answering ‘pass’ to most of the questions before a compatriot in the audience encouragingly shouts: ‘you’re right, Mick – tell them nothing’.

Charlton was mystified as to why this was considered funny.

Crossed cultural wires were also detectable in his bemusement at the numbers that turned out to welcome home the team after Euro 88 – ‘It makes me wonder what the reception would be like if we won something’.

The crowds were so vast in 1990 after the World Cup that Michael Delaney, secretary of the Leinster Council which had dutifully staged matches during Italia 90, later remarked that even when Ireland had been eliminated, more people came out to watch the players on a bus than to attend Croke Park.

But these were celebrations of the national metier, honourable and dauntlessly contested defeat. By 1994 when the Ireland manager, having indicated that he would stay in the US to work as a pundit with ITV, was badgered home after a tournament that had begun sensationally ended in conventional disappointment, the mood was different.

The crowds, although decent, bore the same resemblance to four years previously as Trump’s inauguration did to Barack Obama’s.

Peter Quinn, elected president of the GAA in 1990, had a shrewd sense of what Italia 90 signified. Gaelic games, he argued, couldn’t compete with the popular appeal of big international events but that wouldn’t be the norm, nor has it been.

In terms of a legacy from those years, it was that they forced the GAA in a way to grow up. Soccer, as proscribed by the old Ban up to just 16 years before Charlton’s appointment as Ireland manager, had to become more seriously treated than an act of sporting heresy.

It’s interesting that the language of justification for exclusion in the old Rule 42, used to forbid the use of GAA venues for rugby and soccer, shifted from ‘foreign games’ and ‘alien codes’ to ‘competing sports’, which at least did the rivals the dignity of accurately describing them.

That development was already under way. Quinn’s predecessor as president, John Dowling, said that he would spend the Sunday afternoon of the Euro 88 Ireland-England match doing his garden. As a man whose only sports interest outside of Gaelic games was athletics, Dowling would have regarded this as an unexceptional preference.

The furore that followed ensured that the GAA wouldn’t be caught off guard again when it came to Ireland’s participation in big tournaments despite it being a standard (and irritating) journalistic task for years to come to contact Croke Park in the hope of further indiscretion.

By Italia 90, as screened again recently in the Loosehorse documentary The Boys in Green, GAA PRO Danny Lynch was out wishing the team well for Italy, as was Nicky English on behalf of the Tipperary hurlers.

I don’t like the judgemental tag of ‘event junkies’ because all sports rely – as we know only too well in these times of curtailment – on crowds coming out for their big occasions, which is why they’re big occasions.

After Italia 90 the GAA benefited from the extraordinary Dublin-Meath series a year later. Obviously it couldn’t be planned but it happened and affirmed the ability of Gaelic games to have their own mass-spectator epics.

By coincidence or not, the year after each of Ireland’s three appearances in the World Cup the GAA has recorded significant increases in championship numbers – most recently in 2003 when 1,962,769 spectators – still a record – attended the summer’s championship.

The Charlton years paradoxically brought out the GAA’s great strength – its games as modern sports competing with other games without losing their cultural distinctiveness and not some theme park, ring-fenced by anathema.