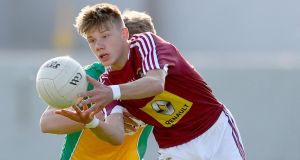 Jack Torpey is one of a number of Westmeath under-20 players on the St Joseph’s, Rochfortbridge team that will contest the Leinster ’A’ final against Naas CBS. Photograph: James Crombie/Inpho

The Lake County may have only ever won one Leinster football title but when it comes to schools GAA few in the province have a finer tradition. There are more schools from Westmeath in the Leinster senior ‘A’ football championship than any other county.

This Friday, St Joseph’s, Rochfortbridge will aim to become the sixth school from Westmeath to claim the title, appearing in their first ever final. Fifteen years after they first entered the grade, and 125 days after the final was supposed to be played.

GAA fans from all over the county, and province, would usually be making plans to attend the rescheduled Bro Bosco Cup decider in Tullamore at 4pm. Not to mention bus loads of current and past students from both Rochfortbridge and their opponents Naas CBS, as well of course as family and friends.

Instead though, only 200 people will be allowed into O’Connor Park, including players, officials, management teams and media.

The final was initially rescheduled for Friday, July 24th but was brought forward a week, along with the ‘B’ final, to the day that competitive GAA is permitted to resume. It means that the meeting of Cnoc Mhuire, Granard and Coláiste Cholm, Tullamore – which throws in at 1pm in Mullingar – is likely to be the first official game since the outbreak of Covid-19 put a halt to all GAA activity four months ago.

Both games will be streamed live on Leinster GAA’s YouTube page on Friday afternoon.

“An allocation was given to both team managements and it’s their decision how to distribute the tickets, but it’s a very small crowd, effectively it’s behind closed doors.

“If it was played last year, or the year before, there would’ve been a couple thousand people at it, so there’ll be a lot of disappointed uncles and aunts and friends. In some cases parents aren’t even going. But it’s beyond the GAA, it’s a Government restriction. To be honest the schools are just thrilled to get the games played and they fully understand.

“When I spoke to the two schools in April, at the time it was gloomy for everyone but we all remained optimistic. We were guided by the restrictions but we always felt if an opportunity presented itself we would be ready and waiting, and the 17th is the first available opportunity and we were true to our words.”

The final was originally to be played on March 14th, a day before the closure of all schools in the country due to Covid-19. In early May the Government opted to cancel Leaving Cert exams in favour of students being awarded predictive grades or calculated grades based on their classwork, but lockdown restrictions have eased considerably since allowing for the resumption of GAA activity. And with it the chance for St Joseph’s, Rochfortbridge to complete their fairytale.

It’s just one year shy of 40 years since team manager Luke Dempsey first came to the school, and the former Westmeath, Longford and Carlow manager first entered a team in the ‘A’ championship in 1995.

In an interview in these pages in May he explained his players were “mad to play this final. They’re enjoying putting up the different things that they’re doing to stay ready on WhatsApp and it keeps them busy. They are living in great hope that this will be played. And we give them that hope by staying positive that things will improve as weeks lead into months.”

The co-educational school currently has 850 students, with less than half of them boys. Less than a third of the number in Naas CBS. The Kildare school are aiming for a third title in a row, after losing last year’s Hogan Cup final by just a point to St Michael’s College, Enniskillen.

The St Joseph’s team, however, takes in players from Offaly and Meath, as well as Westmeath. Jack Torpey, Shane Fleming, Ciarán Daly are Westmeath under-20s, while Devin Hill, who bagged the crucial goal in their semi-final win, is one of a number of last year’s Westmeath minor team. The team captain is Offaly under-20 player Aaron Kelleghan. The son of former county player Paschal, he scored 0-7 in their semi-final win against Dublin side Coláiste Eoin, who were in pursuit of a hurling-football double.

There are only four schools matches still to be played across the four provinces – the ‘A’ and ‘B’ football finals in Leinster and Ulster. The four schools involved in the two finals in Ulster remain fully committed to playing those matches, although dates have not yet been confirmed. Croke Park has already made the decision to axe the Hogan Cup for 2020.