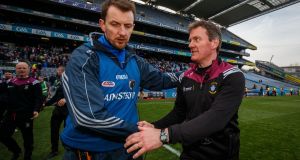 John Sugrue has stepped down as laois manager after two seasons in charge. Photograph: Oisín Keniry/Inpho

The somewhat swift exodus from football management has continued with confirmation that John Sugrue has stepped down from his position as Laois senior football manager after just two seasons in charge.

Despite some notable progress during those two seasons, the Kerry native, who runs a successful physiotherapy business in Portlaoise, has decided against seeking another term. He becomes the ninth football manager to step aside as the football championship reaches its concluding stages, with some uncertainty still hanging over the future of others.

Since Sugrue took charge for the 2018 season, Laois were promoted from Division 4 to Division 2 for the 2020 Allianz Football League, in successive seasons, while they also reached the 2018 Leinster Final, their first provincial final in 11 years, albeit losing heavily to champions Dublin, 1-25 to 0-10, while also reaching the round four of the qualifiers in both 2018 and 2019.

He also took over in Laois from Peter Creedon, who was in charge for just the single season in 2017, and leaves the county searching again for some continuity.

In a statement, the Laois county board thanked Sugrue for “his hard work, dedication and professionalism that he brought to this role”.

“In his two-year term, he managed our Senior Football team to successive promotions from Division 4 to Division 2, progressed to a Leinster Senior Football Final in 2018, whilst also reaching Round 4 of the Qualifier series in his two years involved.

“He has certainly left the panel in a better position to take the challenge to a new level under a new direction. Laois GAA wish John the very best of luck in whatever role he now chooses.”

Sugrue came to the county with some fine credentials, the trainer in Kerry under their manager Pat O’Shea in the 2007 All-Ireland-winning year, and 2008. He then worked as a physio with Kerry in 2011 and then with Laois in 2012 and 2013, during Justin McNulty’s time in charge of the O’Moore County. He also managed South Kerry to a Senior Football Championship in 2015.

After the promotion to Division 2, Laois beat Westmeath in the Leinster quarter-final, only to lose to Meath in the semi-final, 3-13 to 0-11. They then beat Derry and Offaly in the qualifiers, before losing out to Cork for a place in the Super 8s, losing the Round Four qualifier 4-20 to 1-15

It follows the news on Monday that Rory Gallagher was also stepping down after two years as Fermanagh football manager, despite the fact he guided the team to their first Ulster final in 10 years when they reached the 2018 decider, where they lost to Donegal. Fermanagh were also promoted to Division Two during his time at the helm.

Evans, the Kerry native who also previously managed Tipperary and Roscommon, also decided not to seek a third season in the position, while some uncertainty still surrounds the likes of Armagh’s Kieran McGeeney and also Kevin Walsh in Galway as to their exact positions for 2020.