Walsh no stranger to Cody's ability to deliver the unexpected 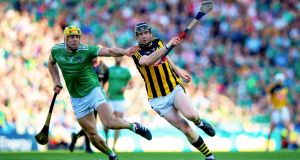 Kilkenny’s Walter Walsh in action against Limerick’s Dan Morrissey at Croke Park. “Limerick are such a physical team and they have huge work-rate so we knew the effort was going to have to be massive.” Photograph: Tommy Dickson/Inpho

Walter Walsh is no stranger to Brian Cody’s mastery of delivering the unexpected. His senior inter-county career began with a typical selection coup by the Kilkenny manager before the 2012 All-Ireland final replay when Walsh was called up to make his debut against Galway.

He scored 1-3 from play, which won him the Man of the Match award, as Kilkenny romped to a big win over the team that had beaten them in the Leinster final.

This season has been disrupted with injury but the big Tullogher Rosbercon forward has only been forced out of one match in which he was badly missed, the home defeat by Galway in June’s Leinster championship.

“That’s the way it was with my ankle injury,” he says. “You’re pushing to get back and thank God now it’s been great for the last month. Staying injury free is really important because there’s so many games. That’s just key for everyone.”

A sense of what he brings to the team was evident in the All-Ireland quarter-final win against Cork when, introduced as a replacement at half-time, he fired over three points, as Kilkenny overwhelmed their opponents in the second half.

Saturday’s shock victory over Limerick was effectively decided by Kilkenny’s rampant opening quarter in the course of which Walsh scored two points, establishing what cricketers might call a good first-innings lead, which the champions were never able to catch.

Whereas final opponents Tipperary were on everyone’s radar after a storming round-robin provincial championship, Kilkenny’s incremental improvement, as key players returned from injuries, has pushed them to the forefront of a year that had been widely written off as part of a rebuilding process. Instead they’re back in the final for the first time since losing to Tipp in 2016.

“Yeah, I was only chatting to one of the more experienced lads. When we came in first, it was nearly the norm. You nearly expected to be in an All-Ireland final. It makes you appreciate it more, definitely. When you’re not in one for three years, you’re – it’s not that we were less hungry for it or anything like that but it does make you realise what a special thing it is.”

The semi-final wasn’t won simply on the basis of a fast start. Limerick clawed back most of the deficit by the break. Did three points feel a bit tight at half-time?

“Yeah, it was a bit but I suppose before the game, you’d have taken a three-point lead at half-time in a heartbeat. We put a positive spin on it at half-time. We didn’t make it out to be a negative that they’d got a couple of scores to bring us back to three. We were still ahead and that was the main thing.

“We had a strong breeze in the first half and we were playing against it in the second but I think we managed that quite well. We worked extremely hard. Limerick are such a physical team and they have huge work-rate so we knew the effort was going to have to be massive and we knew how hard it was going to be to win the ball, never mind the match.”

So how does Brian Cody keep producing at this level?