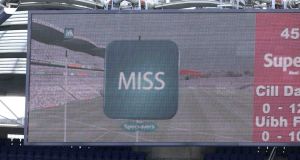 The Hawkeye system was used for the first time at Croke Park in 2013. Photograph: Morgan Treacy/Inpho

Tipperary – and their supporters in the crowd of nearly 62,000 – may have been baffled by the sequence of events that led to a four-point swing in Sunday’s All-Ireland SHC semi-final against Wexford but it’s not even the first time this year that Hawk-Eye has intervened to deprive them of a score.

The decision to award Lee Chin a point for a free, apparently caught over the bar by Tipp goalkeeper Brian Hogan, took 32 seconds during which time John McGrath had the ball in the Wexford net. In allowing the Chin score, referee Seán Cleere erased McGrath’s effort.

In March’s league quarter-final defeat by Dublin in Thurles, there was a similar incident. Former referee Dickie Murphy from Wexford is a leading Hawk-Eye official and was on duty in Semple Stadium that day. He recalls what happened.

“Tipperary had scored a point but they didn’t get it – and lost the match by a point – because the ref went back to a Dublin wide, which had gone up to Hawk-Eye and corrected the call. So Dublin got a point and Tipp didn’t. It just happened that when we were calling it, the ball was in the middle of the field and ended up going over the bar.

“In fairness there wasn’t much commotion about it.”

Murphy defends the score detection system and disagrees with suggestions that any deliberation should be subject to a time limit.

“Someone said that it was suggested on television that there should be a time limit of 15 seconds but there’s no use having the technology if you don’t use it. People will argue over how long it took on Sunday and I don’t know the reason why but the right decision was made in the end and that’s what it was introduced for – to make sure to get the right decision.”

He says that Sunday’s sequence was unusual because queries about whether a ball has crossed the bar – as opposed to within the posts – can only be registered by Hawk-Eye, rather than match officials.

“I wouldn’t think it would happen again. There are hardly any instances of decisions taking that long.”