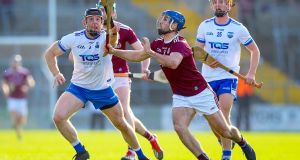 Novelty everywhere you look at Croke Park next Sunday. For the first time, the old house will host a triple-header of league finals: camogie at noon, hurling at two, football at four. In hurling, Waterford and Limerick will meet in a league final for the first time. In football, the clash of Mayo and Kerry hasn’t been seen in a league decider since 1972. And while there’s nothing novel about Galway and Kilkenny meeting in a camogie showdown, the fact that they kick off the bill is an innovation in itself.

The usual ebbs and flows of a late-March Sunday saw promotions, relegations and qualifications across the country. In football, Kerry and Mayo made the Division One final with victories over Roscommon and Monaghan respectively. Kerry had the handier day of the two, swatting the Rossies aside by 2-17 to 0-13 in Dr Hyde Park. Apart from sealing qualification for the final, the game was notable for a first of 2019 for Young Footballer of the Year David Clifford.

The defeat meant Roscommon returned to Division Two, along with Cavan who were also beaten at home, losing 1-10 to 1-16 to Dublin. Some eye-catching returns at Breffni Park too: Philly McMahon and Bernard Brogan both turned out for the All-Ireland champions for the first time this season. Those defeats for Cavan and Roscommon meant Monaghan will play in Division One next year for the sixth straight season, despite their 3-15 to 1-18 defeat to Mayo in Castlebar.

The Division Two final will take place on Saturday, with Donegal and Meath facing off. Donegal put their foot on Kildare’s throat early and never let up in Ballyshannon, eventually running out to a 1-20 to 0-10 victory. Meath top the table and return to Division One after a wait of 14 seasons, sealing their ascent with a 2-12 to 0-11 home win against Fermanagh.

At the bottom, the Cork football nadir found a yet lower level with Ronan McCarthy’s side relegated to Division Three. The 2012 Division One champions, who were in a league final as recently as 2015, at least went down fighting, pulling off a 3-9 to 1-14 win in Armagh. But the damage suffered earlier in the campaign ultimately proved intolerable and they fell through the floor again.

With them went Tipperary, after the day’s most dramatic encounter, in Thurles. They held Clare scoreless for a full 27 minutes in the second half of their encounter and looked like relegating Colm Collins’s side. But a late rally saw Clare stay up, with their trio of warhorses Keelan Sexton, Gary Brennan and David Tubridy scoring 1-2 between them in the endgame.

Swapping places with them will be Laois and one or other of Louth and Westmeath. Laois’s return to Division Two means a second successive promotion for John Sugrue since taking over at the start of 2018. Their 1-15 to 1-12 win over Carlow sent the two teams in opposite directions – Laois up and Carlow down.

Turlough O’Brien’s side head back to Division Four on a head-to-head basis, having finished level on points with John Maughan’s Offaly. Maughan’s side saved themselves on the last day with a 1-11 to 1-10 win over already-relegated Sligo.

The last remaining group game in Division Three will be played between Louth and Westmeath on Saturday. The winner will be promoted, although a draw will do Westmeath. As a knock-on, the Division Three final will now be played the following Saturday, April 6th.

In hurling, Waterford and Limerick came through the semi-final double-header in Nowlan Park in front of a 13,227 crowd. Limerick won the opener far more comfortably than the 1-19 to 1-16 scoreline suggests. A flying display from Cian Lynch as well as some colossal manning of the half-back line by Declan Hannon and Diarmaid Byrnes meant Limerick had Dublin more or less where they wanted them throughout.

They will meet Waterford in the final after Páraic Fanning’s side pulled a 1-18 to 0-19 win out of unpromising beginnings in the second game. Despite looking like they were going to be blitzed by Galway early on, Waterford rallied and even overcame a Mikey Kearney red card midway through the second half to survive and thrive all the way to full-time.

The game was overshadowed by the late injury to Joe Canning which stopped the game for several minutes and ultimately saw him being stretchered off. Galway manager Micheál Donoghue said afterwards that he thought it was a groin problem but that they would know more after he was assessed.

Galway have a seven-week break until the start of the Leinster Championship. Time to get the holy water out.

Sonia O’Sullivan: Running in the bubble as the shoe wars raged

Sonia O’Sullivan: Running in the bubble as the shoe wars raged