Jackie Tyrrell: Just when they look to be coming, Dublin freeze 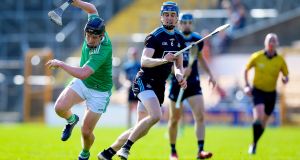 Carton House, Maynooth, Co Kildare. That stunning drive from the entrance gate up to the 18th century Manor House. Passing sun-drenched golfers as they shoot the breeze. Down over a lovely hump-back bridge, around the bend with a beautiful view out in front of you as the sun bounces off the roof of the boat house. A peaceful and stunning setting.

Yeah. Good luck with that, lads. I’m three years retired this year and I haven’t set foot in the place and I have no plans to. Carton House to me always meant hell. It was where Kilkenny went for a pre-championship training camp and it wasn’t about spa treatments or nice robes or comfy slippers.

We went there to work and that meant going to war with each other. I have a clear memory of our trip there in 2012, a couple of weeks out from playing Dublin in Portlaoise in the Leinster semi-final.

Arriving at Carton House, some lads had one hand on a jersey, others had full possession. I was barely hanging onto mine with my fingertips. I knew the weekend was going to be torture but that suited me. It was going to be ridiculously hot – if the weather didn’t make it that way, the intensity of the competition between us would. I needed that torture in order to be ready physically and mentally for Dublin.

There are plenty of parallels between the build-up to that game and the meeting of Dublin and Kilkenny in Nowlan Park this weekend. We were All-Ireland champions at the time and probably should have been heavy enough favourites.

But this was Anthony Daly’s Dublin and they were on the rise, having beaten us in the league final in 2011. Plenty of people were giving them a right chance. If ever they were going to turn the tide against us in the championship, this was going to be it.

I get a real sense of that this week as well. Kilkenny are obviously lower in the pecking order now than they were then but Dublin are coming from a low enough base too. Kilkenny are at home so they’re favourites but with all the injuries, they look vulnerable. It’s a huge game for both of them, easily as crucial to the rest of their summer as that game between us in 2012 was.

We lined that Portlaoise game up from a long way out. We went to Carton House ready to put in an animal weekend to get ready for it. You knew you’d be training twice and playing a match on the Saturday and you had to be prepared to kill for the jersey. Kill in a good way if such a thing exists – kill yourself in effort, kill the player you’re marking with work-rate, kill the other team you play in the match on the Saturday with an unbreakable will and desire to win.

That game would be savage, nobody giving an inch because a strong performance could spring you into the team. Likewise, a sub-par performance and you could be off it, so Carton House could be a graveyard for players. Most of the time, the hurling wouldn’t flow but that’s when you knew it was really, really good.

I often felt forwards got more of a kick out of turning backs over in those games than actually getting scores. I know Brian loved when it happened. Likewise when a forward got a ball, backs would swarm all over him like a rash, take the ball from him. Turnovers were as regular as the doctor running onto the pitch to treat a player – one every minute. But the game never stopped. Get another person in and play on. We loved it.

On top of everything, I shared a room with my clubmate Eoin Larkin. Eoin had his nose broken in a training match before and so he snored like a roaring dinosaur every minute of the night. Meaning I didn’t sleep the best either. I wonder who broke his nose? Karma!

All inter-county teams would have rolled out training weekends these past few weeks in the lead-in to championship. In all honesty, I feel they’re even more important now than when I was playing. In the old system, you went into that first match with all guns blazing but if it didn’t work out for you, you knew you had a few weeks in your back pocket to analyse, reset and go again.

You don’t have that any more. A pre-championship training camp is the last chance management have to get some meaningful intense work done. It’s their last chance to try different players in different positions, to work extensively on different tactics and shapes.

Most of all, it’s the last time they will get to raise training to a really intense level, to create a red-hot environment that challenges players. Can your skill level stand up to that intensity? Is your decision-making sound when everything is going a million miles an hour? There won’t be a single training session during the round robin weeks that will be cranked up this high. Do it now or forever hold your peace.

Back in 2012, that weekend in Carton House got us completely primed and ready for Dublin and we ended up beating them well. TJ Reid got a goal in the first half and we played with huge intensity and forced them into a lot of mistakes which we were able to capitalise from.

One thing I remember from late on in that game was Dotsy O’Callaghan getting possession and Mick Fennelly and I bottling him up and turning him over and getting a free. We celebrated that free like it had sealed the All-Ireland, even though we were 12 or 13 points up at the time. That was the mindset we were in on the day, fuelled by the work we had put into the build-up.

That’s partly why I give Kilkenny a tentative nod this weekend. I really think there is very little between the sides but I know what Brian’s approach to this time of year is and I just think that’s a massive thing in Kilkenny’s favour.

They will need every bit of it, though. Momentum and belief been building around this Dublin team through a really strong league campaign. They overturned Tipperary and then, in a really contrasting game tactically, they put Limerick to the pin of their collar for long spells in the league semi-final.

Dublin arrive in Nowlan Park with a lot of narrative and expectation about them being dark horses for a sustained run in the championship – and rightly so. In Matty Kenny, they have a really astute manager who understands the game deeply, just like Anthony Daly in 2012.

Kilkenny may well be vulnerable here, no doubt about it

My worry for them is that so far, they are quite similar to that 2012 team in that they haven’t proved yet that they’re up to handling expectation. In fairness to them, they’ve had very limited opportunities to show it yet but the question stands. Go back to the biggest results for the Daly-era teams – they almost always came when they were underdogs and when they’d been written off.

It’s been a problem for Dublin teams all down the years. Just when they look to be coming with a bit of momentum and they’re fancied to take down one of the bigger teams, they freeze and flatter to deceive. If Matty Kenny is going to bring them places, that has to change. And this would be a perfect time to get started.

Kilkenny may well be vulnerable here, no doubt about it. The league was a mixed bag and the team has been hammered by injuries. Take the backbone positions of the team – goalkeeper, full-back, centre-back, midfield (x2), centre-forward, full-forward. Seven key positions and Kilkenny are missing four of them. No Eoin Murphy, no Conor Delaney or Joey Holden, no Cillian Buckley, no James Maher. Richie Hogan is a doubt as well.

Contrast that with Dublin who in Eoghan O’Donnell, Sean Moran and Danny Sutcliffe have strengthened their spine and built their team around it. They are tactically fluid and have the comfort of transitioning from conventional shape to playing Moran as an extra defender.

Cuala’s success was built on his comfort in that role and Dublin have followed suit. That will be needed throughout the championship if they need to stem the tide in certain periods of a game, or if the opposition get on top in the middle third.

The last time the Dubs came to Kilkenny for championship was for a football game in 2016 against Laois. They took over the city and Nowlan Park and there was a festival carnival around Kilkenny that day. Hopefully we get the same kind of buzz but I have a feeling the scoreline might be a little tighter this time round.