Cork the team to beat in minor hurling decider 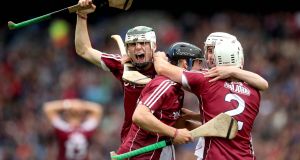 The path from minor to senior grade is well worn by Galway hurlers, and with 17 of the senior side that featured against Tipperary in the semi-finals with All-Ireland minor final experience to their name, its value is well proven.

The westerners prowess at this grade – they have 10 wins from 29 finals – is the reason everyone questions the dearth of senior titles to their name, but in his third year in charge, manager Jeff Lynskey is happy to keep feeding the senior set-up with talented diamonds primed for a final polish.

“Look, there is an opportunity for us, but we are giving these lads a chance to experience a minor final.

“What we want to do then is to progress on to senior like the Sean Loftuses and Jack Grealishs and Tom Monaghans have done. That’s what it’s all about is getting lads up to senior level with Micheal (Donoghue).”

This year Cork are back in the decider for the first time in 10 years. Their last win was in 2001 when former Munster and Ireland rugby star Tomás O’Leary captained them to victory, but they are regarded as the team to beat here following impressive wins over Dublin, Clare, Tipperary and Waterford on the way to the final.

It is hard to plot a form lines between the sides as both Galway and Cork defeated Clare during this championship and both claimed big wins, while Lynskey thinks there is little to separate the two teams, even if Cork beat Galway in the recent Under-17 All-Ireland semi-final.

“It’s a big challenge, they will obviously be favourites. We’ve watched them twice this year and we played them in a challenge [MATCH].

“But like anything else, we have an opportunity. It’s a two horse race and we go in with a fighting chance.

“Our U-17s played them in a semi-final down in Thurles with only a puck of a ball in it really. Our lads survived the test in Thurles and some of the lads we had involved against Kilkenny in the minor semi-final, they survived that test also.

“When you get to Croke Park, you know it’s about who wants it most and who has the strength of character. The greatest skill level will survive the test.”