‘It’s the stuff of dreams’: Borris-Ileigh prepare for big day at Croker 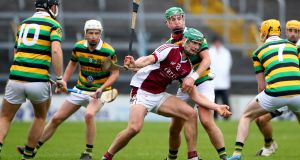 Between now and Sunday week, both Borris-Ileigh and Ballyhale Shamrocks can take fresh stock of their recent achievement: two small rural parishes competing for the biggest prize in club hurling.

No one sounds more aware of this than Borris-Ileigh forward Conor Kenny, the team vice-captain who produced a man-of-the-match display in their semi-final against St Thomas’ last Sunday (though hard-pressed for that honour by centre-back Brendan Maher).

What tougher a test do you want? They’re such a seasoned team, probably the best club team of all time

“None of us have played in a club All-Ireland final, and Ballyhale have the trump card on us there,” says Kenny, who finished with 0-3 on Sunday. “They know the ground, they know the route, they know the field. Not many of our lads have ever played in Croke Park before.

“But at the end of the day, it’s a hurling game, and a hurling field. You can build it up all you want. All we want to do is perform. There’s no point in going up there and not giving a performance. We’ll knuckle down now and do a bit of homework on them, where they’re strong and where we can get at them, and it’s just about going there and trying to perform.

“What tougher a test do you want? They’re such a seasoned team, probably the best club team of all time. And I think it suits us being underdogs. I think ever since the county quarter-final we’ve been underdogs. We don’t read into that at all. We know what’s inside the four walls of the dressing room. We’ve great heart and good hurlers as well so it’s about going out there and doing ourselves justice.”

Indeed, not many people fancied Borris-Ileigh to emerge from Tipperary this season, their first county title in 33 years also backed up by a first Munster title since 1986.

“It wasn’t too long ago that we were beaten in a North final by Kiladangan, and well bet [sic],” says Kenny. “I remember going back to training the following Saturday and saying, ‘What’s going to happen to us?’ We just had a meeting and cleared the air and said we would take one game at a time, and this is where the journey has taken us now, to Croke Park, and I just can’t wait. We know the task ahead of us but it’s something we’ll relish.

We didn’t train on Christmas Day, but we did train on Stephen’s Day, ran the turkey out of us that day

“It’s the stuff of dreams to go there with your club, especially this team. I never thought at the start of the year we would have ended up in Croke Park. I would have thought you were mad if you told me that, but that’s how things have worked out and we’re just delighted.”

Despite some assertions that Christmas had been cancelled in Borris-Ileigh given the looming date with St Thomas’, it wasn’t actually all hard work.

“We didn’t train on Christmas Day, but we did train on Stephen’s Day, ran the turkey out of us that day.

“It probably would have been a bit different to previous years when you mightn’t have known whether to have a break over the Christmas. Our situation was fairly straightforward. We just stayed training. We played Kerry, we played UL in challenge games and were performing well. We knew what it was going to take to be on our game and thankfully we were.”

Manager Johnny Kelly has been here before, leading Galway club Portumna to All-Ireland glory in 2009, and before Sunday week may well share some thoughts with Ballyhale captain Michael Fennelly, given he’s also part of Fennelly’s backroom team in Offaly.

There’s a great backroom team there, and hopefully we can bring some of the results from Ballyhale or Borris-Ileigh

In fact, both shared the sideline on Saturday as Offaly beat Meath to set up a Kehoe Cup final against Antrim in Abbotstown this weekend. Kelly’s reputation as the manager with the Midas touch continues as he’s also guided Coolderry to an Offaly hurling title, and Abbeyknockmoy to a Galway intermediate title.

“Sure we’re trying to build Offaly back together,” Kelly says of his role in Offaly. “There’s a great backroom team there, and hopefully we can bring some of the results from Ballyhale or Borris-Ileigh.”

Meanwhile the GAA has confirmed that the AIB All-Ireland hurling final between Borris-Ileigh and Ballyhale Shamrocks will be first on the bill on Sunday week (2pm), followed by the meeting of Galway’s Corofin and Down’s Kilcoo (4pm) in the football final, the game which sees Corofin out to make history as the first club to win three successive All-Irelands.