Galway hurling in rude health and blossoming from the bottom up 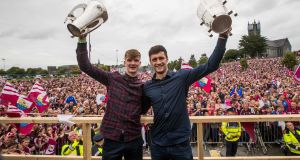 Over the years Galway’s underage and club pedigree on the national hurling scene became a stick to beat them with. The question became constant: what are ye doing wrong?

It was as if the county was manufacturing the fastest Formula One car on the grid but couldn’t find anyone to drive it.

On Sunday, Galway will contest the minor and senior All-Ireland finals; a double opportunity to enhance what is a formidable cabinet of silverware. Galway have won 10 All-Ireland U-21 finals between 1972 and 2016. They appeared in a further 11, between 1979 and 2016.

They have 11 minor wins, spanning 1983 to 2017. They have lost a whopping 21 finals at the grade but only eight of those came after that first championship in ’83. Furthermore, they have only lost one All-Ireland minor final in this decade (2013).

At All-Ireland club level, they are out on their own: 13 titles won by seven different clubs: Gort and Loughrea also appeared on St Patrick’s Day without winning. Overall, it is a picture of hurling in ebullient health. What are they doing right?

“We try our best to think outside the box,” says Damien Coleman, the Connacht Hurling Director and a former player with Portumna.

“There has been a joined-up approach in recent years, where all our stakeholders were brought together and it was agreed that our development process needed to go in a certain direction, with increased games and opportunities for our children and new players.”

By stakeholders, he means the Juvenile Fixtures Board in Galway, which, Coleman reckons are “the best in the business”, Cumann na mBunscoil and the games and coaching development which he heads up. Some 155 national schools in Galway have regular coaching sessions but the volunteerism of the teachers in those schools is, Coleman believes, the secret to the progress of young hurlers.

“Not every child has to go to the local club but they have to go to school.”

Because of the Nursery Programme and the Cúl Camps bringing in children as young as five, Coleman reckons there are probably 50 per cent more kids playing the game in Galway now than there was a decade ago. Coleman’s main area of concentration is at the elite end of development heading up the academies. But that arena is not limited to the conspicuously outstanding players. Each club can send at least six youngsters along to the academies and they will get a guaranteed eight weeks of academy coaching.

“That’s at each age group so you can have 24 players from every club going into the academies for two months: that’s the basis of a senior team in years to come.”

In addition, there is a coaching pathway, which seeks to attract and identify potentially excellent coaching. Jeffrey Lynskey, the minor coach seeking his third All-Ireland on Sunday (2015 and 2017) is emblematic of the density of talent within the county.

An excellent juvenile hurler, Lynskey played Galway minor for two years (winning an All-Ireland in 1994, his debut season), played three years at U-21 and featured in Galway senior squads without ever nailing down a constant place.

A teacher by profession, he deepened his interest in coaching, starting at Liam Mellows and graduating to county level, where he worked with the legendary Mattie Murphy before becoming the minor coach in 2015.

It’s a demanding role: the tussle for places on the Galway minor squad is fierce; you have so many talented young hurlers brimming with optimism and dedication and just 30 places. It is an arena with which Michael Hynes is well acquainted as both club officer and parent; his son Kevin hurled at all levels for Galway for almost a decade. Sarsfields have two players on the current panel: John Cooney (a younger brother of Joseph) and Alex Conaire. Both are underage again next year.

“It is tough. It is very difficult for the managers and selectors to start off with maybe 180 young players and whittle them down bit by bit. I would know a bit about it having had a son involved for a few years. It is very, very tight and sometimes if one was at the training sessions, there is very little difference between number 28 who makes the panel and number 33 who doesn’t.”

To counter that, Galway came up with a radical idea this year.

“We entered four minor squads: three in the national Celtic challenge cup and one with Jeffrey,” says Coleman.

“So we had four under-17 squads. It means that nearly everyone gets a chance at that level. And we got considerable criticism for this, even in the county. Some people thought it was madness. But we believe in the young fellas coming through our system and we don’t believe they are finished at 17. So we have had 130 young lads at that age group playing in a Galway jersey.”

Sarsfields are one of the most decorated clubs in Galway. They won their first of their seven county championships in 1980 and have featured on the honours roll in every decade since and claimed back-to-back All-Ireland honours in 1992 and 1993.

Their most recent county title was in 2015: since 2011, five different clubs have won the county title.

“I think the club game is stronger now in that there is no super team,” Hynes says. “In my opinion Portumna were one of the best club teams ever and they were beating opponents by 10 and 12 points. Recently, we have had different winners over the past four years and maybe eight clubs with hardly a puck of a ball between them.”

Again, this is down to administration rather than magic.

Coleman hurled and coached with Portumna; he witnessed the frustration of the years being locked out by Sarsfields and Athenry in the 1990s and, later, the frustration of others when Portumna dominated. The county board decision to change the structure to a three tier programme featuring 36 teams – 12 in senior, 12 in Senior B and 12 in Intermediate – means that there are no mismatches any more. The competition in the two pools of six at Senior A is relentless.

“Every game becomes meaningful,” Coleman says. “Every team has something to play for. I just feel it was a clever way to go.”

Michael Hynes believes the decision to enter Leinster was the key to transforming Galway’s senior heartbreak into All-Ireland success.

“Galway won two All-Irelands in 1987 and 1988 by playing four games. This year’s team has already played eight. Teams are no longer going in cold.”

A back-to-back win for the senior team on Sunday would confirm the sense that the old game is travelling well in the county. But either way, the old question that plagued Galway hurling people doesn’t seem to matter as much anymore.

Mayo GAA cut contact with Tim O’Leary after ‘Horan Out’ tweet 07:22
‘I want that gold medal’: Rhys McClenaghan talks Tokyo Olympic aspirations 07:02
Five Golf Classics for you to tee up at in 2020 06:00
Out of the shadows: Floodlights a priority for clubs across Ireland 06:00
AFL’s equalisation policies a possible guide for the GAA 06:00
Crossword Get access to over 6,000 interactive crosswords