GAA Statistics: Galway’s Glynn could be the key as giants collide 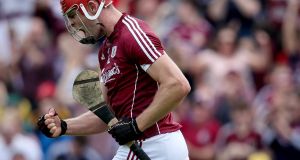 Galway’s Jonathan Glynn: There have been Galway shooting opportunities after 55 per cent of the balls struck into Glynn, a good return. Photograph: Oisín Keniry/Inpho

Galway’s lowest-scoring forward this summer could be the greatest threat to Limerick in Sunday’s All-Ireland hurling final.

Johnny Glynn has started only half of Galway’s Championship matches, and his tally of 2-2 makes him only their joint-eighth top scoring forward from play. Only nine forwards have started a Championship match for the reigning champions and midfielder David Burke has also scored two points more.

However, the big full forward could be the man to cause the most damage in Croke Park this weekend, providing he builds on the flashes of brilliance he’s shown in recent weeks, rather than what came before.

The Limerick and Galway teams which take to Croke Park on Sunday will have a combined average height of just under 6ft 2in, with only five players from the two expected starting 15s under 6ft. That’s an increase in just under an inch on last year’s final average – which was a shade under 6ft 1in – while for the three years previous it was just over 6ft. When Clare won the title in 2013 the average height in the drawn decider was 5ft 11in.

The prototype Galway hurler in particular has changed - looking back to the XV who played in the 2005 All-Ireland final and seven of that team were 5ft 10in or under.

The current Galway side are taller than any of the teams who competed in the last five finals. The next highest is the 2017 Galway team, who were on average marginally taller than this year’s Limerick team. The next tallest were Galway in 2015 followed by Kilkenny in 2014.

Teams have been getting bigger in every way – the average weight in the 2013 final was 81kg, and this year it is 86kg.

However, the greatest strength of Galway's towering attack is that they rely on no individual. They have had 14 different scorers so far in the 2018 Championship, top of that list being Conor Whelan with 2-18 (Clare's Tony Kelly is the Championship's top scorer from play with 1-23). He is followed by Conor Cooney with 1-16 and Joe Canning, who has scored 0-19 from play and 1-68 overall. The contribution to the team’s in-play total from their various scoring forwards ranges from 5 per cent to no higher than 16 per cent.

At the bottom end of that scale is Glynn – who has actually scored more goals than he has points in Championship hurling for Galway (8-7). Nevertheless, he is set to go into Sunday’s final of big men with a considerable height advantage over the Limerick fullback line. This could be decisive.

The Treaty county have only conceded 10 goals in 14 matches this year. Their average concession for 2018 is 0-23 per match, and their tenacious fullback line has been one of their strongest assets all season. However, they did struggle to deal with John Conlon’s ball-winning against Clare – he scored 0-4 from play that day – and 71 per cent of their goals conceded this summer have been off the back of high balls.

Glynn does not have the dynamism of the Banner county’s number 14, but is a far greater aerial threat.

The Ardrahan clubman, aged 25 and into his sixth season with the Galway senior hurlers, had a slow start to the summer. Still commuting from New York where he has worked since 2016, he had to be content with five minutes off the bench in the Leinster opener against Offaly. In that match and his 20-minute cameo against Kilkenny combined he made one block, won one puck out and one breaking ball, and played one handpass and one long pass. He featured in most of those encounters in the half forward line, as was the case against Wexford in his first start of the year. He made one interception, one hook tackle and assisted a goal in an otherwise forgettable showing before departing with an injury which forced him to miss the win over Dublin.

Coming off the bench against Kilkenny in the drawn Leinster final, Glynn began to show why Michael Donoghue is going to the effort of bringing him back from the US week after week. He caught two puck-outs and popped them off, and did likewise under a long free. The one long ball put in on him he won and then struck just wide. He did enough to get his start in the replay, and it’s from there on in when he began to spend the majority of his time at the edge of the square. He’s responded to the responsibility with some crucial scores and assists.

For every 70 minutes that he's been on the field this summer, Galway have delivered seven balls into Glynn in the full-forward line. Since coming on in the drawn Leinster final, he has faced 31 balls hit into him. He, or a team-mate, have won 65 per cent of those and he has scored his 2-2. There have been Galway shooting opportunities after 55 per cent of the balls struck in, a good return given most of those were contestable deliveries. And for some he faced more than one defender.

Galway don’t overplay the option, but when a long ball into Johnny Glynn comes off, the end result is a score just under half of the time. And a goal almost 10 per cent of the time. They know the danger and when he's hot they let it in.

He has also been an option for long puck-outs around the D, or out in a half forward position, and has won 62 per cent of his 42 contests. And Galway scores have resulted from half of those wins. In all, he has made 14 overhead catches so far this year - in the air he is a strong as any hurler in the country.

Galway will be met with an unusual challenge this weekend though, a team who match up almost as big as they are. Limerick have actually won six of the 10 Championship meetings between the counties, and while they come in as underdogs they also won the most recent clash in this year’s league (although Galway have won eight of the last 10 league meetings).

But on hurling’s biggest day, when giants collide all over the field in Croke Park, Galway will aim to exploit a rare physical mismatch and prove both teams right that size does have a lot to do with it.

*All heights and weights are according to the information provided by the respective teams for official matchday programmes.

Crowds of 4,000 to return to sporting events in England from next week 17:32
Former Ireland assistant manager Maurice Setters has died aged 83 17:06
Davy Russell on neck injury: ‘it was a very close one and I dodged a bullet’ 17:00
Aidan Coleman steps in for the ride on returning Epatante 17:00
Spurs chairman Levy warns of ‘irrecoverable loss of income’ if fans don’t return 14:03
Crossword Get access to over 6,000 interactive crosswords