David Reidy ready and waiting to play his part for Limerick 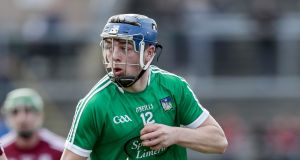 A key man in Limerick’s promotional drive out of Division 1B, David Reidy has had to sit on his hands all summer – but was ready when his chance to shine came.

Reidy didn’t appear for Limerick’s first six championship games of the summer but with their All-Ireland semi-final against Cork deep in extra-time he was sent in to the action by John Kiely.

As he had done in six of his seven appearances this season, Reidy popped up with a score to help ensure Limerick had a four-point cushion despite Patrick Horgan’s late goal for Cork.

The Dromin-Athlacca clubman knows he will likely be handed a sub’s jersey this weekend – he’ll be the first player from the club to play an All-Ireland final if he features – but as usual he’ll be ready to be the difference.

“You have to be patient, especially with this squad, so any chance you get you have to go and grab it with two hands,” said Reidy, who won a Fitzgibbon Cup title with Mary Immaculate College in 2016.

“There are fellas who haven’t played much hurling this year who are brilliant hurlers, you have to make sure you take the chance when you get it. It was nice to come in the last day but it was only a semi-final, we’ve nothing won yet. The 19th August we’ve to do it all again.

“I was lucky I came on the last couple of minutes against Cork but it could have been anyone, and it could be anyone the next day. I got used to it [being a sub] over the year. All the Munster games were big ones, there was a sense of the crowd, you didn’t get a chance to think of what was happening, within seconds you were on the field.

“I don’t remember any stand-out point, I remember we kept clawing back with the next score, the next score. The subs had a massive impact and gave a great lift to the lads still playing, to give that extra few per cent.”

Reidy first came into the Limerick squad in 2013, but after being released by John Kiely in his first year in charge, Reidy didn’t wait for his native county to come back.

Two months on from being cut he accepted an invitation from Limerick legend Joe Quaid to play with the Kildare hurlers, a county he continues to work in today as a teacher.

He said: “I wasn’t part of the 2017 panel and Joe [Quaid] rang me and asked if I wanted to come in, I was living and working in Kildare, so I did. It was a great experience.

“It appealed to me straightaway, I didn’t think it was going to happen but he rang me and asked me in for a week or two. I thoroughly enjoyed it, the set-up was great, so I continued.

“I didn’t know what to expect but I can’t speak highly enough of the players and management, Kildare hurling in general and the Christy Ring competition.

“The effort the boys put in are as good as anywhere else, the professionalism is the same, and I was delighted to see them win the Christy Ring this year. I can’t speak highly enough of them.”

But after shining in the white shirt he caught the eye of Kiely and the Limerick boss gave him another shot. With 14 points to his name in the national league Reidy quickly repaid that confidence, and he says he was delighted to get another shot despite the original setback.

“When John rang me I didn’t think twice about it, it was what I wanted to do and I got the call. John rang me back then and said I wouldn’t be part of their plans for 2017. It was disappointing but I had to take it on the chin and go away and work.

“I had to think of why he didn’t want me and to work on those things, and thankfully I got the call last October, November, to come back in.

“It was a surprise, I did get a shock, but I didn’t hesitate to say yes and I’m lucky to be part of a quality team and management.”