Kiely confident his charges can rise to the biggest occasion 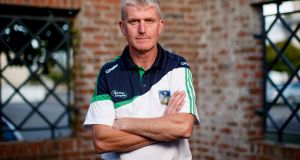 John Kiely: “When you have confidence, and you have the work done, you know there is a chance to at least give yourself the opportunity to win matches.” Photograph: James Crombie/Inpho

Limerick manager John Kiely said he detected something way back in February when they defeated Offaly in Tullamore that suggested this might be a special year for them.

Kiely may be only in his second season in charge of his native county but he has been involved with Limerick underage teams for close on a decade after his playing career ended.

He knew the potential within the county when he took over in September 2016 after guiding Limerick to the All-Ireland U-21 title in 2015 and he noticed a spark back in February this year which augured well in a 1-24 to 0-10 win over Offaly.

“I just got that feeling that day above in Offaly, at the league game, that there was an extra spark there. I think from that game onwards we grew in confidence from game to game.

“When you have confidence, and you have the work done, you know there is a chance to at least give yourself the opportunity to win matches.

“And we’d a lot of work done. It wasn’t like we’d had a terrible season in 2017. Okay the results didn’t go our way and we didn’t get good championship performances, six out of 10 sort of performances.

“But we knew if we got it up another notch or two we could have been very competitive. We only lost to Kilkenny by three points in Nowlan Park. That’s not a bad performance. Having had 18 or 19 wides, we let a chance slip that night. During the course of the league we felt momentum building.”

Kiely was on the extended panel when Offaly did their late number on Limerick in the 1994 All-Ireland final and he was a substitute two years later when Wexford won the crown.

Now he’s back as a manager hoping to achieve what eluded him as a player and the secondary school principal at Abbey CBS in Tipperary town is loving every minute of it.

“Sure it’s a huge honour and privilege to be the manager of the team in the first place. It wasn’t a decision I took lightly getting involved two years ago. I knew getting into it that I needed to be prepared for the journey that we wanted to take.

“Like I don’t come from ‘a hurling background’. There wouldn’t have been hurling in our family. Galbally is a football heartland. Our lads would have played hurling with Garryspillane and I would have gone on to play with Garryspillane afterwards. It wasn’t lost on me that somehow they were possibly taking a bit of a punt.

“But listen, I’ve been involved since 2009, ten seasons, at various grades, intermediate, U-21, senior with John Allen. I knew the scene, knew what was involved. And I enjoy it. got to know the lads well in the [U-} 21 campaign of 2015. Knew some of the other lads from the [U-] 21 campaign of 2011, the senior campaigns of 2012, ’13 so I knew what I was dealing with. I knew the players very, very well. It wasn’t like I was going into a group I didn’t know at all where you’d have to start from scratch.

“They’re great lads, buckets of ability, great attitude. Hugely skilful. Great characteristics of resilience, determination, never-say-die attitude and a work ethic. At the same time, you know you’re taking on a responsible position. And I’d be my own biggest critic at the end of the day.”

He’s not concerned about their lack of All-Ireland senior final experience against a side in their third decider in four years, and believes his men have shown a great ability to deal with the challenges put in front of them.

“It hasn’t come up for discussion really. We have a lot of people on board who have come up to Croke Park with teams at this level, like Joe O’Connor and Paul Kinnerk in 2013 with Clare. So, we have a certain amount of experience there. All the Na Piarsaigh lads have been up with All-Ireland club finals. I know it’s not the same but every day helps.

“Plus, a new experience tends to bring more out of yourself and you have to rise to that challenge. The semi-final I think was a good barometer of how these guys are able to rise to the next adventure. And get the best out of themselves.

“As the game rose, the more they rose to it. And that’s a great thing to have in the locker going into a final,” added Kiely.