From The Ashes to ash: the unique craft of the hurley maker 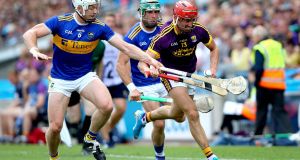 At the start of the first morning of the first Ashes Test match at Edgbaston last Thursday, Australian opener David Warner marched out to the middle clutching his bat like a giant club.

Less of a bat, more like a tree trunk, Warner’s weapon of choice appears as thick as it is wide – a huge piece of willow emblazoned with garish orange stickers.

The core tool of the trade, a cricket bat remains a prominently old school bit of kit – and for any cricketer, getting a bat remains a rite of passage. Yet while they remain a work of art, and predominantly hand-crafted, modern day cricket bats are essentially wooden advertisements – particularly at the highest level.

Indeed, in that opening Test match at Edgbaston, six of the England and Australia players – including Joe Root and Steve Smith, the best batsmen on either side – were using bats manufactured by New Balance.

One of the biggest sports brands in the world, New Balance had revenues of more than €4 billion in 2018 and supply kit for some of the world’s biggest sports teams, as well as Ireland. It’s far removed from the romance of getting your first cricket bat.

Compare this to the two mammoth All-Ireland hurling semi-finals between Kilkenny and Limerick, and Wexford and Tipperary.

In those two epic encounters all 30 players were at one with their hurleys, yet to the untrained eye it was virtually impossible to know who had made them, or where they had come from.

The GAA has strict rules regarding sponsorship on equipment and kit – hurleys included.

In the 2003 All-Ireland hurling semi-final Cork’s Seán Ó hAilpín and the Wexford duo Damien Fitzhenry and Paul Codd attracted the association’s ire for using hurls emblazoned with Paddy Power’s logo. They were paid €750 each for their troubles.

Yet while sponsors are off limit, the GAA rules allow hurls to be marked with the stamp of the manufacturer – and there is nothing to stipulate how big that stamp could be.

In theory, the bigger the stamp, the greater exposure a hurley maker would receive – yet this isn’t a tactic used by manufacturers.

Indeed, a GAA spokesperson told the Irish Times: “The only thing that’s permitted on hurleys is the manufacturer’s stamp, and they generally tend to be the same size.

“It’s not something we’ve encountered in the past and I don’t think players would be particularly enamoured by the appearance of the hurley if it was covered in graffiti.

“The hurley maker, generally speaking they have a personal relationship with the player – it’s not a third-party endorsement of a product. We’d be 135 years old this year and we’ve never had an issue with a hurley manufacturer and the size of their stamp.”

With little mainstream exposure, hurley manufacturing remains a relatively intimate industry, and going to buy one is an inherently intimate experience.

Brian Walsh has been making hurleys in Wexford since the 1990s, and supplies the likes of Conor McDonald, Rory O’Connor, Paudie Foley, Paul Morris and Dublin’s Chris Crummey and David Treacy.

Every hurl is unique and each player likes their own weight – accounting for a grip weighing roughly 27 grams – as well as a certain pick up and a certain feel.

But this attention to detail isn’t just reserved for inter-county stars – players learn what they like from an early age and more often than not tend to stick with it for life.

Walsh says: “To me, I’ve always said in this business, people think the elite players are so important to you. And they are very important to you, and your brand, but to me a youngster of seven, eight, nine years of age is actually more important because they’re the future, and the future of your business.

“You have to look after them, because usually when they start using your hurls they take a liking to them and as they get older and older they’ll keep using them.”

Armed with a hurl the Cushendall clubman was asked to puck a golf ball 148-yards, in tribute to the 148th Open. A casual flick of the wrists later and the ball has carried 147.

And McManus knows all about the importance of finding the hurl for you and sticking with it: “Well I play with a hurl from a guy called Matty Murphy at Higginstown [in Kilkenny].

“I’ve a photo of me when I first started senior hurling with my club at around 15 or 16 years of age, and I have a hurl which was a Matty Murphy hurl. I’ve been using the same one [style] for around 15 years.

“Sometimes you can go through months without breaking a hurl, and then you can break two or three in one match. It’s hard to know, you can’t really plan for it – but you always try and have three, four, five that you like with you at all times.

With the majority of hurlers retaining a strong allegiance to their hurley maker, and with that allegiance most likely being passed down through generations, breaking into the industry is a difficult task – but not impossible.

Colm Foley set up 65 Hurls in 2013. At the time, they were one of the rare few full-time hurley makers in the whole of Dublin – a staggering statistic given the size of the playing pool in the capital, and the amount of club players from around the country exiled in the city.

Yet despite seeing an obvious gap in the market, it took a while for Foley and 65 Hurls to get going: “A lot of the established lads would be second generation hurley makers from a quite traditional background where their dads, granddads would have done it,” he said. “Coming into it new was difficult at the start, because I literally came from nowhere.

“Hurling snobbery is a well known phrase – I’d probably be considered a hurling snob myself, by the nature of where I work and my obsession with hurling. When I was growing up I had to buy a hurl in Kilkenny or in Tipperary or Galway, because that’s where the established lads were. That’s where you had to go.

“When I started you’d be told you had to go down and get your hurls from Kilkenny or wherever, so I was trying to break that mould.”

Tucked away on an industrial estate in north Dublin, 65 Hurls is a treasure trove among a series of nondescript business units. You can see deep into the factory from the car park, a haze of dust floating around amid the whir of saws and sanders.

There are lumps of ash on the floor in the rawest shape of hurls, ready to be sculpted – when he’s flying, Foley can turn out around 10 per hour. It’s fascinating to see him in action, and the end product feels special to hold.

He supplies them for Dublin goalkeeper Alan Nolan and Daire Gray, but like with the more established Walsh Hurleys, he believes the future of the business lies in youth.

“It’s a really traditional thing, you need to have a name – but you can’t just have a name from starting a business,” he said. “It’s very hard to convince a lot of lads who are 25- or 26-years-old who are playing at the highest level to go ‘here, start using this hurl’ when he’s using someone else’s for his whole life.

“So my strategy and aim was to focus on the juveniles, in terms of really quality juvenile hurls – concentrate on the Dublin Under-14s, 15 teams and if one or two came through into the senior team each year using my hurls that’s good for me.”

Another nuance of the hurl is the different styles prominent in different counties or areas – whether a Cork style, a Wexford style, a Tipp style or a Munster style. In some places the bás or handle is bigger than others, depending on the type of hurling favoured.

Accommodating this is another part of the hurley making art, Foley said: “I have a few different shapes. The way I looked at it was that Dublin club hurlers are going down to the country and getting a particular shape hurl – so why can’t I make it?

“We all get the same wood, most of us will get our Irish ash from more or less the same supplier [ash is often supplied from the Netherlands and eastern Europe, as well as Ireland]. I felt if I can do that shape then they can come to me.”

While the hurley making industry is as fertile as ever, there are fears over its longevity due to ash dieback, a fungal disease of ash plants which was first discovered in Ireland in 2012.

However while the ash keeps arriving at their door, neither Foley or Walsh are too concerned about its potential threat – nor are they tempted to switch to synthetic hurleys or those made from composite materials.

As Walsh says, “you will never beat the clash of the ash”.