The Backdoor: it’s time to ditch the dummy teams 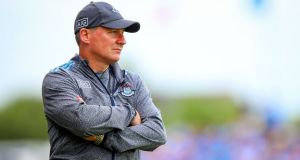 The madness begins midweek – each and every week.

When will the teams be released?

Will they be dummy teams?

Who will make the benches?

While squad lists must be submitted by Thursday – after which they cannot be altered – they remain out of the public forum; so when starting XVs are eventually announced towards the end of the week they, more often than not, raise more questions than answers.

These weekly bouts of lunacy, as it happens, can be easily addressed with just a few simple initiatives.

Firstly, squads should be published through Croke Park as soon as they’ve been confirmed for match programme publication. The most obvious of starting point.

Secondly, the whims of managers can be catered for by simply enabling them to hold off naming their starting XV until an hour before throw-in. If 26-member squads have been published most supporters will be happy just having a point of reference in the form of a programme that, at present, has been made largely redundant.

The 6-2-6 formation, as outlined in every programme, is somewhat outdated anyway, if not an insult to our intelligence.

Finally, there’s no reason teams cannot assign squad numbers before the summer once championship panels are announced. Positions, like formations, have changed, the number on a player’s back no longer corresponding to the position they are playing in. So why continue with this weekly pantomime which was only highlighted again this weekend?

When word of Dublin and Tyrone’s significantly weakened teams emerged through unofficial channels – as a result of someone, presumably, with the luxury of access to a programme leaking them online, further speculation ensued. Were the heavily weakened sides bluffs? Were they double-bluffs? And who were managers trying to fool?

Alas, the late changes inevitably arrived: six for Dublin, one each for Tyrone and Donegal.

Elsewhere, Kerry made two and so did Mayo.

Despite ending up on the losing side in Saturday’s All-Ireland under-20 football final, Dublin’s Ciarán Archer scored 1-5 to finish the season with 10-35 to his name.

Meyler falls on his sword

Amid intense public dissatisfaction John Meyler stepped off the managerial carousel last week, becoming arguably the biggest ejection this season to date. Whilst the decision was his own, it’s difficult to ignore the lack of public support for the erstwhile Cork manager and the effect it must have had on his decision.

Any man that fails to deliver the Holy Grail is, of course, a failure, but these things always require a modicum of perspective.

Where were Cork prior to Meyler’s arrival onto Kieran Kingston’s backroom team in 2017?

His role back then may be overstated but, then again, facts are facts and Cork bounced back from a disastrous campaign in 2016 to win a Munster title.

Once he took over from Kingston after the 2017 season, he immediately retained the Munster crown before losing to eventual champions Limerick in one of the games of the decade.

Unfortunately, losing to Kilkenny this year initiated the calls for an immediate resignation. In hindsight, Brian Cody’s side have been clearly underestimated and it may transpire that Meyler has lost to the eventual champions in both his years as senior manager, as was the case when he was under-21 manager in 2017.

His exit may yet prove a cautionary tale.

“I always got the sense that when I came into RTÉ first there was a bit of an old boys’ club feeling to it and it was a bit like joining a political party in the olden days – You walk into the Dáil bar and you vote with us and talk like us.”

– Speaking on the RTÉ GAA podcast Donal Óg Cusack took aim at some of his fellow RTÉ pundits after he was criticised for his comments on the Sunday Game.

Return of the enigma

How did the likes of Harte, Horan and Keane react to the casual comments of Jim Gavin announcing Diarmuid Connolly’s return. One can only speculate but it probably went something along the lines of “Holy Camoly!” – or something a little stronger.

Even if Gavin had decided not to utilise the prodigal son this year, he had created a sense of panic among Dublin’s main rivals. Yes, Connolly hadn’t pulled on a Dublin shirt since the 2017 All-Ireland final but he was still an enigma – a player who forced other managers to question themselves. That, in itself, was a huge asset.

But the Dublin manager opted to play the Connolly card early, wiping away the element of uncertainty, giving others hope.

The three other teams left know the talent is there but, for this year anyway, the 32-year-old is little to fear.

His 686-day hiatus had predictable results; yesterday he was decidedly off the pace by his standards and though he pulled the strings to an extent he was afforded a vast amount of space. That will not happen again.