And then there were four at the serious end of things 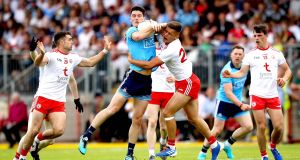 Four teams left in the football championship, and a winter of yakkety-yak is the only certainty. The final weekend of the Super-8s had one compelling game, Mayo’s latest last-stand gleaming away there like an Eiffel Tower dominating the cityscape. Everything else was little ado about less.

In Omagh on Sunday, 15,315 people paid in to see a glorified challenge game between Dublin and Tyrone. The Dubs ran out with a 1-16 to 0-13 win to confirm top spot in Group 2 of the Super-8s, and secure an All-Ireland semi-final against Mayo on Saturday.

In a game where the two sides showed 28 changes between them, the pace never rose a hack canter. Had it been a training game the coaches would have whistled it to a stop and sent everyone back to the dressing rooms to start again.

It should be said that nobody deserves any particular blame. This wasn’t a disgrace or an outrage or a shambles or any of that kind of stuff. It was just a bit, well, boring. In other words precisely what both sides wanted it to be. Dublin and Tyrone have season-defining games next weekend, and they were only protecting their interests here.

Yet it’s probably not good news for the Super-8s. Dead rubbers happen in every sport, and in bigger competitions than this one. But the ordinary Gael’s aversion to meaningless championship games this late in the summer means it’s bound to come up in committee rooms over the coming months.

Not that Jim Gavin will worry one way or the other. His side are two games from the end of the Yellow Brick Road now, and the sorrowful mysteries of championship structures couldn’t have been more superfluous to his thinking afterwards. The suggestion that maybe an extra week until the semi-final would have given him or Harte incentive to play more of their first-teamers was dead-batted.

“No, for every team there’s a day or two in between the amount of rest they get,” he said. “So it’s the same for all teams really. I don’t think anyone has an advantage over anyone else. It is what it is.”

Mickey Harte, true to form, might be the only GAA voice today going against the grain. He quite likes the Super-8s, thanks very much. He’d like to find a way not to have to play a semi-final in the next breath as the final group game but other than that he’s all for it. Not alone have Tyrone come through it both years, they’ve survived defeats to do so.

“We can all fix something in one competition or for one set of teams, but to fix it for everything, football and hurling, I understand all the difficulties in getting it perfectly right.

“But it seems a bit quick of a turnaround from your last qualifier, Super-8, quarter-final, call it what you will, to have to go out within six or seven days again. It does seem like something better can be done there, but I would hope people would be reflecting on that and trying to do something about it.

“I’ve always been a fan of not having the old style quarter-finals where provincial champions could fall on their sword in one day. I never thought that to be fair. I had various permutations to make it different but nobody ever listened to me. So the Super-8s is the thing that came up here, and I’m happier with that because you get a chance to be beaten and still stay in the competition. So I’m all for that opportunity, but I think there could be better ways of making it happen.”

Even when it leads to dead rubbers like here and in Cork?

“There mightn’t have been much at stake here, but did people not enjoy that today? Did people not come along here in droves and enjoy that, or were they bored out of their head watching that game?

“It was interesting for the people who were there. The players didn’t show any sign of ‘I wish we weren’t here’ or ‘this is no big significant game’. They gave it all they had, and I think that it’s lovely on a summer day in Omagh to see 15,000 people here. I enjoyed that game today even if I didn’t enjoy the outcome.”

For what it’s worth, Roscommon went to Cork and plundered their first Super-8s win at their sixth attempt, winning by 4-9 to 3-9 in Páirc Ui Rinn. But now those sides exit the stage and leave history to the others.

Dublin v Mayo on Saturday. Tyrone v Kerry on Sunday. Plenty of time for yak, but there’s serious business to be decided first.