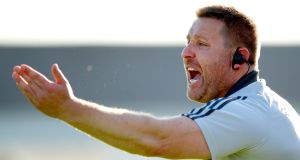 Cian O’Neill: the Kildare manager led his county’s campaign for the game to be played in Newbridge. Photograph: James Crombie/Inpho

With the possible exception of ice cube bags and water supply there is no greater shortage in the country this weather than tickets for Saturday evening’s Round Three All-Ireland SFC qualifier at St Conleth’s Park in Newbridge. At least among Kildare and Mayo supporters.

After ending their midweek stand-off and reaching an agreement to move the game out of Croke Park and back to St Conleth’s Park, both the GAA and the Kildare County Board have advised supporters from both counties not to come near Newbridge unless they have one of the hot tickets; for those that do the advice is to remember the maximum strength sunscreen and sliced up watermelon. And of course the shades.

The 7pm throw-in leaves plenty of time for the arrival of home and travelling support, but there will be strict traffic management around the various access points to Newbridge: presumably the pitch is suitably watered too before any hosepipe ban.

When pitted against each other on Monday morning, Kildare first drawn and therefore entitled to home advantage, the GAA originally fixed the game for Croke Park on the advice the official capacity at St Conleth’s Park of 9,020 (reduced by 10 per cent to 8,200 when deemed all-ticket) was unsuitable.

So the stand-off began, Kildare manager Cian O’Neill insisting it was “Newbridge or nowhere,” while the GAA insisted it was “Croke Park or nowhere”. For 48 hours there was no backing down.

Then on Wednesday morning the GAA agreed to the extra assurances from the Kildare County Board and An Garda Síochána that upgraded traffic management plans and stewarding would be put in place, and approved the Newbridge venue on an all-ticket basis. All season ticket holders would be accommodated, with Mayo having approximately 3,000, and Kildare approximately 1,000.

That means Kildare supporters will still be outnumbered at least two-to-one, and closer to three-to-one among the season ticket-holders.

The Kildare County Board acknowledge the ticket shortage, but stated it was still better than surrendering home advantage.

We fully accept that the decision to play in St Conleth’s Park will impact significantly on the number of tickets that are available for Kildare supporters and that it will not be possible to facilitate concessions at the game. We would ask people who do not have a ticket for the match on Saturday not to turn up in Newbridge.”

The GAA also reiterated that stance: “We would be urging anyone without a ticket not to come into Newbridge on Saturday evening, because there won’t be any tickets on sale at the venue, and you won’t be able to get into the ground without one,” said the GAA’s director of communications, Alan Milton, “

The game also goes out live on Sky Sports, the restoration of home advantage also gently improving Kildare’s odds – from 11/4 to 5/2, though Mayo are still fancied to progress into round four, having beaten Limerick and then Tipperary by a combined score of 6-38.

Kildare ended their nine-game losing streak, including a first championships loss to Carlow since 1953, with a victories over Derry and Longford. Home advantage at least is now on their side.

1 Record numbers of adults in Ireland participating in sport and walking
2 Munster braced for worst of financial crisis due to Thomond Park debt
3 European clubs must take lessons from financial demise of former greats
4 When the action stops, sports photographers think outside the box
5 Gerry Thornley: Home and away Six Nations could be its ruination
Real news has value SUBSCRIBE

Ireland women to complete Euro qualifiers later this year 14:47
European clubs must take lessons from financial demise of former greats 13:51
Premier League clubs vote to resume contact training 13:02
People who attended illegal match in France are asked to get tested 12:09
Record numbers of adults in Ireland participating in sport and walking 11:45
Crossword Get access to over 6,000 interactive crosswords