Dublin put stuttering start behind them for eight-in-a-row 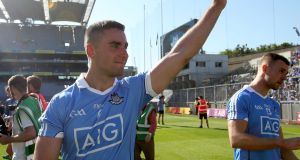 Despite a sluggish first half, Dublin still managed to rack up their biggest win in a Leinster final in this decade of decades for the county. It was a 57th title for the county and extends their record sequence to eight.

Laois stayed afloat, within a stretched interpretation of the metaphor, by half-time but the deluge followed inexorably and the champions won as they liked in the end.

The headline news before the start was that Dublin captain, Stephen Cluxton would miss his first championship match in 14 years. Evan Comerford replaced him as he had done during the semi-final and Andy Bunyan from Scoil Uí Chonaill came onto the bench.

Comerford was in the spotlight early, getting up to a high ball in the third minute to punch it to the safety of a defender and his composure wasn’t short-circuited by failing to send a kick-out beyond the 20-metre line in the ninth minute.

The competitive early phases were largely attributable to a fairly significant systems failure on Dublin’s part albeit that Laois plugged away, gamely contesting the middle where Kieran Lillis was effective marking Brian Fenton and trying to isolate Donie Kingston in the full-forward line, encouraged by a couple of flashes of discomfort the big Arles Killeen forward was causing.

Ultimately though, the closeness of the margin – six points at half-time – was more to do with uncharacteristically poor shooting by the champions, who had plenty of chances in attack but weren’t as clinical as usual.

Nine wides under-represented that superiority but in the second half a more predictable pattern emerged and Dublin shot just one chance wide – in injury time when the game as a contest had long slunk away to die in the brilliant mid-summer sun.

Con O’Callaghan’s almost template early break through the Laois defence took place within 10 seconds but Graham Brody saved well. It was the first of many frustrations for Dublin.

These included a range of missed goal chances, most conspicuously Paul Mannion putting a 21st minute penalty wide of the right post after Niall Scully had been brought down by Mark Timmons having found a channel through the middle of the defence.

Former Footballer of the Year Jack McCaffrey came on for the second half and gave manager Jim Gavin reassuring evidence that his turbo-charge hadn’t been affected by the cruciate injury from which he is in the process of returning. Two mesmerising runs – the first aptly compared by RTE radio analyst Eamonn O’Hara to Roadrunner, as it took him past three defenders – created goal chances but he finished tamely and first, Brody and later his injury replacement Eoghan Keogh blocked the shots.

It wasn’t just goal chances that went a begging. That statistic of nine wides mostly constituted poor shot selection and at times worse execution but Dublin are equally as relentless when things aren’t going their way and they simply reloaded and went again, as the umpires waved their arms in front of the Hill.

Goals aren’t always Dublin’s weapon of choice. Death by a thousand cuts will do as well and although Laois had actually drawn level after a bustling first quarter and were within a point by the 26th minute, the rat-tat-tat of points undid them and over the ensuing three quarters of an hour they were outscored 0-22 to 0-5.

To their credit though Laois rallied after the scary start of O’Callaghan’s near-goal and in the third minute, Eric Lowndes, getting up into attack quite a bit as his marker Damien O’Connor dropped deep, popped a ball into Ciarán Kilkenny, starting in what has become a familiar full-forward posting this season, and he held off a defender to slip the ball into the net.

Dean Rock added a free and things were taking an ominous turn for Laois but they edged their way back into contention, starting with a confident point by Alan Farrell. Kingston was causing trouble when brought into the game and hit three points between the 11th and 18th minutes, the first a free and the others from play.

By the break Dublin were six clear but it was the increased accuracy of the second half that turned the match into procession. The centrepiece of this was a 20-minute sequence up to the 66th minute during which they fired an unanswered salvo of 10 points, all from play and all featuring the familiar, methodical build-up, probing until the shooter was identified.

It was no coincidence that the sequence got under way just as Cormac Costello was coming off the bench. The catalyst for the 2016 All-Ireland final replay victory over Mayo shot four points from play and the only blot on his ledger was the team’s solitary wide in the 72nd minute.

By the time Laois’s hard working Evan O’Carroll broke the spell in the 68th minute, there was nothing left to salvage.

Gavin won’t have been happy with John Small picking up a straight red card for striking O’Carroll, shortly after coming on as a 52nd-minute replacement although the manager said he disagreed with the sending off.

Dublin simply rolled on, oblivious to the reduction in their circumstances and will face Donegal in the first series of matches in the new round-robin quarter-finals.