Dublin end Tribesmen’s summer in the middle of June 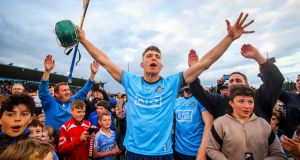 At the end, the Galway crowd turned around the press box and asked and asked. How? What? Why? It took minutes/centuries for the result to filter through from Wexford Park. Scores tied, draw game – and slowly it dawned on everyone what that meant. Galway are out of the championship. Gone on June 15th.

A rifle back through the record books reveals the date to be Galway’s earliest exit from the summer since the 1960s when they played in the Munster championship. In 1968, they took a hiding from Cork on June 23rd and that was that. In modern times, their earliest exit was in 2014 when they went out on July 5th. This is going to feel weird for them.

How did it happen? Well, this Leinster Championship has teetered and tottered all summer and here, finally, was its forfeit. When Galway didn’t put the hurt on Carlow in the opening match last month, it was dismissed as early-summer lethargy. No biggie. Sure that would only matter if it all came down to scoring difference in the end.

Look at the table this morning. The truth screaming from it is that Kilkenny, Wexford and Dublin all made sure to beat Carlow by double-digits when they played them. In fact it was Wexford’s only win was still enough to carry them to a Leinster final. Galway only beat Carlow by six in Salthill, however, and that left a hostage to fortune.

So when Chris Crummey drifted into the Galway square in the 68th minute on Saturday night like Paul Scholes arriving late, Galway were open to disaster in more ways than one. Crummey’s shot was low and skiddy and it beat Colm Callanan low in his left corner.

With that, out of nowhere, Galway’s summer was in the hands of others. Shortly after, word drifted up on the airwaves that Lee Chin had scored an equaliser for Wexford. And poof! Galway’s championship was done. Back-to-back All-Ireland finalists, champions in 2017, suddenly with a long summer in front of them.

“They were the permutations coming into it,” said Micheál Donoghue afterwards. “Obviously we’re absolutely devastated with it, the fact that we lost and that the other game was a draw, that was out of our control. Look, as I said, I’m immensely proud of our lads, they worked hard and kept at it. It’s a tough one to take but that’s what we have to take. That’s sport, like. We’re obviously bitterly, bitterly disappointed.”

It would be wrong, of course, to spent too much time sifting through the Galway ashes here. This was Dublin’s win, coming lo, these many years. Conal Keaney was immense. Sean Moran not far behind. Crummey got forward for his goal and gambled as well earlier in the second half to force a penalty. There isn’t a whole lot of Oisín O’Rorke to go around but what he was dead-eyed here throughout. He had to be – both Dublin’s first-choice free-takers were injured.

It was tight and tense and stop-start. There were rucks everywhere and both crowds bayed at the ref all night. Galway had the wind in the first half and used it to go into the dressing rooms a point ahead – the fact that goalkeeper Colm Callanan was able to point a free from 85 metres told you the strength of it. It told you too that a margin of just a point probably needed to be more.

Dublin came out and forced the penalty after 36 seconds. In a move the foreshadowed his goal later on, Crummey arrived from the clouds when everyone seemed to be looking elsewhere. Daithí Burke levelled him and took the yellow card. Moran nailed the penalty and Dublin were two ahead.

From there to the end, there was very little to choose between them. Jason Flynn and Cathal Mannion were in fine form for Galway but Dublin had to rely on O’Rorke’s free-taking at the other end. When Donoghue sent Joe Canning on in the 41st minute, it looked like the decisive move.

And yet, and yet. Keaney stormed into the game the longer it went on. He set O’Rorke up for Dublin’s first point from play in nearly half an hour and followed soon after with two of his own. Eamonn Dillon had been quiet – apart from his first half goal – but he gradually got into matters too. A point scored falling backwards in the 57th minute drew Dublin level again.

Into the endgame, and everything up for grabs. Galway were always nip and Dublin were always tuck. Until Crummey materialised with no one close enough to drag him down this time. Green flag, Parnell Park gone bananas.

“It’s a little bit of a monkey off their back,” said Mattie Kenny afterwards. “Moral victories are no good. It was a massive game of hurling there tonight. It would have been no good to us if we ended up with a draw or Galway winning by a point and lads were saying, ‘It was a great game of hurling’. These Dublin players would say they’re tired of the moral victories and they want to start getting real victories. In fairness to them they’re after delivering on that tonight.”