Leinster and Munster hurling round robins - the full permutations

Full explainer: Who needs to do what to reach the finals or progress in third 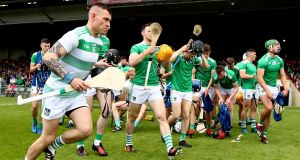 Limerick are unlikely to be knocked out of the Championship following the weekend’s action. Photograph: James Crombie/Inpho

As things stand in the Leinster and Munster hurling round-robins, four teams are battling it out for three places in both championships. But who needs to do what this weekend to secure their progression, and/or a place in the provincial finals?

First and foremost it’s important to remember that, as in the national leagues, if just two teams are level on points a head-to-head comes into play. However, if three or more are level then scoring difference decides it. The top two in each round-robin contest the final, third goes into the preliminary All-Ireland quarter-finals where they will face one of the McDonagh Cup finalists.

One thing we know for certain in Munster is that after four matches, and four defeats, Waterford are out of this year’s provincial and All-Ireland championships. If Kerry were to win the McDonagh Cup they will not only make the All-Ireland preliminary quarter-finals but also face Waterford in a relegation/promotion play-off.

The likelihood of that, though, is remote. If Kerry were to beat Offaly in the final weekend of the McDonagh Cup (and relegate them to the Christy Ring Cup), and Laois were to beat Westmeath then the latter would be tied on four points with Antrim and Kerry. This would bring scoring difference into play for a place in the final but Kerry are currently on -20.

The other thing we know for sure is that Tipp are guaranteed at least third spot.

Sitting pretty at the top of the table as the only team on six points (in either round-robin) after three wins in as many games, Tipperary will reach the final, unless they lose to Limerick and Cork win against Clare. In that case three teams would be on six points, bringing scoring aggregate into the equation. Cork are currently on +13, Limerick are +31 and Tipp are +38. It would take a worst case scenario of Tipp losing heavily to Limerick and Cork winning big against Clare to see Liam Sheedy’s team drop to third.

Clare host Cork in Ennis on Sunday needing a win to stay alive for another day. If they win and Limerick lose, they’ll join the reigning All-Ireland champions and Cork on four points. But their current scoring difference is -30 and although they’d still have a mathematical possibility of reaching a Munster final, even a win could see them staying in fourth. It would take a 22 point win for them to go ahead of Cork on scoring difference. But, if Limerick beat Tipperary and Clare beat Cork by any amount, the Banner county take third on a head to head. A draw will not be enough to enter the reckoning.

If Limerick lose to Tipperary and Cork beat or draw with Clare then Cork will play Tipp in the final. Lose, and if Tipp beat Limerick they’ll need scoring difference as referenced above. Or vice versa and they’ll be out.

As in the Munster championship, four of the five teams remain in the reckoning. The fifth team, Carlow, have already had their season ended by four defeats. Finishing bottom of the Leinster round-robin means that they will drop down to the McDonagh Cup in 2020, unless Kerry win it.

And the Leinster permutations?

As things stand Galway are top of the table, on five points. If they beat Dublin then they will definitely be defending their Leinster title in the final. If they draw they will still be in the final. If they lose and there is a winner between Wexford and Kilkenny then they will fall into third. However, if they lose and Kilkenny and Wexford draw they'll drop to fourth. In that case four teams will be on five points, Galway’s current scoring is +7, as is Dublin’s, Wexford are +15 and Kilkenny’s is +18. Wexford and Kilkenny’s would not change and Dublin would go ahead of the 2017 champions who would therefore exit the championship.

If Dublin win against Galway and there’s no draw between Wexford and Kilkenny, the Dubs will edge the Tribesmen on a head-to-head and reach the final. If they win and there is a draw in Wexford Park then they will be in a scoring difference battle with the other three counties. As mentioned above they will automatically end up in third spot, unless, they can win by more than eight points (that’ll move them into second). If they draw themselves, and Kilkenny beat Wexford by more than eight points then they’ll still take third spot. If Wexford won in that situation the Cats would progress in third on a head-to-head because they beat Dublin on day one.

So as mentioned earlier, a draw for Wexford and a win for Dublin would put them in a four way scoring difference battle. Wexford will take second unless Dublin win big. A draw with Kilkenny and a Galway win would see Kilkenny finish second and Wexford stay in third, as Kilkenny have a better scoring difference. If Wexford lose and Dublin win then they’re out. If they lose by more than eight and Dublin draw then they’re out. But if they win they are guaranteed a Leinster final.

The same as the above applies for Kilkenny, although in a four way scoring difference battle they will be top unless Dublin beat Galway by more than 11 points. And if they lose to Wexford, and Dublin draw, they will still progress. The only way their summer will end this weekend is if they lose and Dublin win.

All in all, of the eight teams in the reckoning, the only two who will definitely have their 2019 season ended by a defeat this weekend are Dublin and Clare. Tipperary (definitely) and Limerick are nailed on for a top three finish in Munster. Clare still have a chance of sneaking in there, but Cork remain the red hot favourites especially given Clare's form. Kilkenny and Wexford will be hoping for a Galway win, which would secure their progression even if they lose their last match. While a draw in Wexford Park and a defeat to Dublin would end Galway's summer.