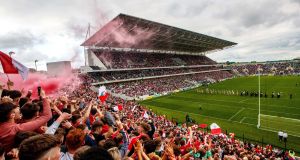 Cork and Limerick parade around Páirc Uí Chaoimh before round three of the 2018 Munster Hurling Championship. Photograph: Inpho

John Considine has a clever metaphor for the evolution of the GAA’s stadium policy and the rush by so many counties to construct extravagant venues, which their fixture schedules will rarely fill with spectators.

“There is a difference between the GAA and other, professional, sports. The latter have to make venues paying propositions but for GAA counties, these grounds have become the equivalent of what all houses used to have: a “good room”. This isn’t actually in use a lot of the time but it’s somewhere to bring visitors.

“Cork’s ‘good room’ is too big and won’t be filled regularly and at the same time you have the clamour from counties, who simply need a venue to hold their games. Last year it was Kildare and Newbridge and this year, Waterford are allowed to use Walsh Park. So there’s this debate about the minimum standard for ‘good rooms’.”

It’s a bracing view of Cork’s shiny new venue, beset by controversies concerning its budgetary over-run and the running repairs necessary to get the playing surface ready for this weekend.

Dr Considine is nonetheless well placed to give an opinion on such matters. A member of UCC’s Department of Economics, with a special interest in sports, he is also manager of the county’s minor hurlers and an All-Ireland medallist and All Star from Cork’s Year of Years, 1990, when the senior double was achieved.

He is endlessly informative on the subject of the GAA’s attitude to stadia and the administrative tension between maximising revenue and using county grounds as amongst other things, an inspiration for children and young people, pointing out that “research indicates that those who are the strongest attenders and biggest spenders at live matches tend to be those who were brought to matches as kids”.

Summer approaches and hopes are high after the stunning success of last year’s trial format, which introduced round-robin matches in the Munster and Leinster hurling championships in which Cork were duly unbeaten in their two matches against Clare and eventual All-Ireland champions Limerick.

County chair Tracey Kennedy acknowledged during the week that with all of the fuss about the pitch she had hardly any time to get worried about the impending first championship clash at the venue with the county’s oldest of rivals, Tipperary. It must come therefore as a relief that an actual match will now take centre-stage at the stadium.

Sunday’s big Munster championship fixture revisits one of the most intriguing aspects of the long history between Cork and Tipp, the record of Páirc Uí Chaoimh as a fortress for the home team.

In this month in 1923, Tipperary beat Cork at the old Athletic Grounds (now Páirc Uí Chaoimh) by 6-2 to 3-2 in the semi-final of the 1922 Munster championship, running late because of the political turmoil of the time.

That remained Cork’s only home defeat until Limerick arrived 73 years later to inflict an overwhelming defeat on the home side in what was Jimmy Barry-Murphy’s first championship match as manager – and what would turn out to be his first steps towards an eventual All-Ireland three years later.

In 2008, however, Tipperary were still looking back 85 years to their last win at the venue. Then, Liam Sheedy was facing into his first championship match just as this weekend he will be the first of his return to the role.

Inspired by a dazzling goal from Eoin Kelly, Tipp turned forbidding history around on the way to winning that year’s Munster title.

It was greeted as a major landmark but with a couple of caveats: the counties had in fact played just eight times in the championship since 1923 with one abandoned (1926) and another drawn (1991) so Cork all told had six victories over those 85 years, as many of the counties’ meetings had taken place in neutral venues, mostly Limerick’s Gaelic Grounds.

Another point to be made is that the record hadn’t loomed large in the consciousness of the home county, according to Considine.

“When I heard that, back in 2008 I hadn’t been aware of it but I could see why Tipp would make it a big issue. It’s great for a team to be able to set a historic target like that and achieve it; 85 years and I bet a pound to a penny no-one threw in the bit about that being only six matches!

“In a way those sorts of stats are a modern phenomenon as is the way people latch on to them. I imagine there were good reasons why away fixtures were difficult in the past.

“You had to travel difficult journeys to get there. Sports science either didn’t exist or wasn’t as advanced. Even in my time we would meet up in the hotel for soup and sandwiches – no careful, three-hour pre-game meal with carbs and all of this. Imagine if you had sports science back then to deal with travel and milling around with the crowds.”

He had his own role in the history of these fixtures, having played in the 1991 Munster final, which ended in a draw before Tipperary reclaimed their title in a replay in Thurles.

For Considine and other Cork hurlers the venue had its own fascination, regardless of the county’s statistical record and playing there exercised its own thrall.

“You’re no longer out in your back yard, imagining you’re whoever. You’re now at the venue where people have done it on the biggest stage and you’ve seen them do it and now you’re out there – and it doesn’t matter if it’s just a schools’ game although like any ground it’s completely different when full – because those memories and stories, mythologies and legends will always be there and keep the cycle going.

“I think it’s something the GAA is still more in touch with because it’s an amateur rather than professional game.”

This Sunday will doubtless create more memories for new generations of Cork hurling. The good room may have had the decorators in but history shows that the visitors rarely enough go home happy.